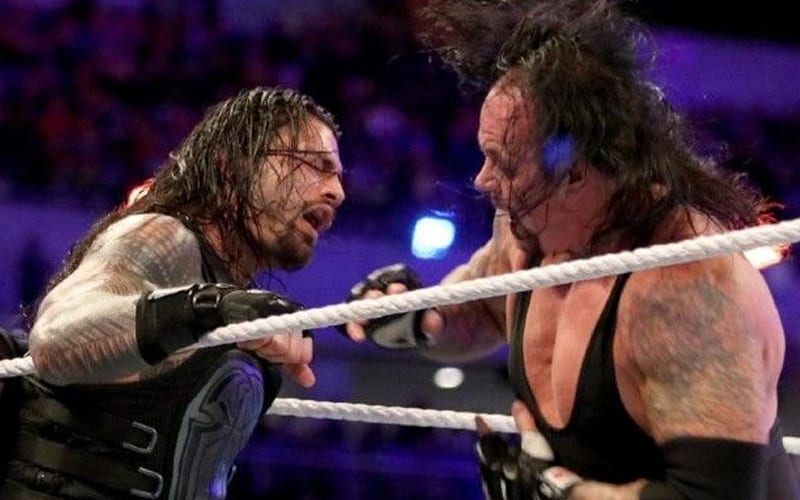 Roman Reigns defeated The Undertaker at WrestleMania 33, but he didn’t want it that way.

While speaking to ESPN, Roman Reigns explained how Vince McMahon broke the news to him that he was getting a wrestler’s dream: a WrestleMania match against The Undertaker.

Roman Reigns had to give The Undertaker credit for keeping that information a secret until the time was right. When Roman Reigns finally realized who his WrestleMania opponent was it obviously made him happy.

Reigns then explained that his first impulse was that he wanted to lose the match out of respect.

“I remember the conversation with Vince,” Reigns recalled. “I saw Taker like a week prior, and he almost gave it away, but he did good in covering it up. He could tell I didn’t know yet. When Vince explained it to me, I was just in awe. It’s something that everybody who gets into the business wants, to get into the ring with The Undertaker. And I remember the first thing I thought was that I wanted to put him over. I wanted to lose. Immediately, that was my instinct. Out of respect.”

“I knew he was in pain, but I didn’t know he was going in [for hip surgery] soon after that or else I would have crafted that story a little differently. So I knew it was on me to try to help carry it. The movement of the match. Orbit around him. But I thought it would have been a better story if I was on my back at the end. Obviously, it didn’t go that way.”

Reigns handed Taker his second loss at the show of shows. The next night on RAW The Big Dog was booed out of the building. It was still a great build.