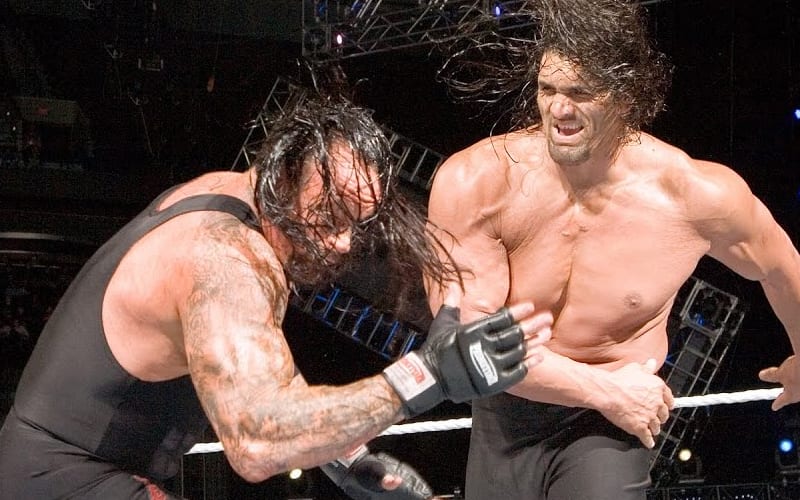 WWE overseas tours can include moments where Superstars get to have a little bit of fun in the ring. The Great Khali took an opportunity to have a little fun with The Undertaker which The Deadman retold on After The Bell.

The Undertaker explained how WWE would book their top guys in six man tag team matches on overseas tours just to preserve them. This was easier on them because they weren’t all doing singles matches. It was also a treat for fans to see so many different Superstars team up with each other. Fans weren’t the only ones having fun.

“It was me, Triple H, and Batista,” The Undertaker remembered. “I think it was Fit Finlay, Khali, and maybe MVP — I’m not positive of all the players. Anyway, I’m in the ring with Khali and he gives me the big chop on the head and down I go so somebody in our corner says something to Khali so he moved into their corner so you know he stood in the corner for a while and then he starts backing up. He’s backing right up into me.”

The Undertaker was only trying to let The Great Khali know that he was there. He didn’t want Khali tripping over him. What happened next was something that The Undertaker didn’t see coming. It was also likely set up by his very own tag team partners.

“So all I wanted to do was reach up and let him know that I was back there and kid you not, I kid you not all I did was take my fingers like that and I squeezed his heel just to let him know I was there so he didn’t step on me so he wouldn’t trip. So I squeeze his heel and all of a sudden it was like a redwood getting chopped down. He fell like a giant pine tree. Of course, I look up and everyone in my corner is covered up and just laughing their asses off, right? I’m just sitting in the ring looking at my right hand like, ‘wow why didn’t I discover that years ago?!’ I couldn’t tell he just fell, he just completely fell and I was like, ‘you’ve got to be kidding me.'”

The Undertaker didn’t break his character for decades. This caused his co-workers to really try and get him to lose that legendary Deadman demeanor. It’s uncertain if The Undertaker actually broke character that night, but it made for a great story years later.