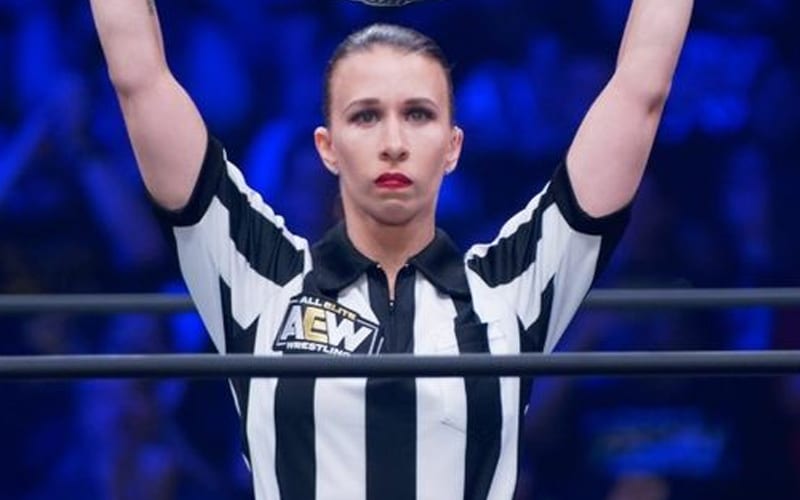 WWE has their own way that they want to present television and that includes the referees. Aubrey Edwards found a home in AEW and she is popular with fans. It wouldn’t have been that way if WWE signed her when they had the opportunity.

Aubrey Edwards was a referee during the Mae Young Classic. Then they stopped calling her. It was told to the AEW referee that Vince McMahon’s company didn’t have a place they could offer

During Talk Is Jericho, Aubrey Edwards opened up about her short stint in WWE. She now considers herself fortunate because WWE has a much different style of referee that they are looking for. Primarily, ones without personality.

“They kind of stopped calling me, I reached out to them a little later and they said, ‘we’ve got nothing for you’ and then they stopped calling. Given my personality, I don’t think I would have been successful there. I’m really fortunate AEW came around because this is a much better place for me, for who I am as a person and what I want out of being a performer. We let our referees be personalities. Tony Khan has said that, ‘our referees have personalities because they are people with personalities.’ At [WWE], they don’t say their names on TV. They are nameless faces, whereas Jim Ross is saying everyone’s name. I don’t know why, I don’t get it, I don’t agree with it, but it’s not my product.”

Aubrey Edwards is also host of AEW Unrestricted with Tony Schiavone. Hosting an official company podcast typically isn’t something that WWE allows their referees to do either.

It’s hard to tell if Aubrey Edwards would even still be with WWE if they offered her a deal when the could have. Odds are Edwards won’t be sending her resume to the Performance Center any time soon.