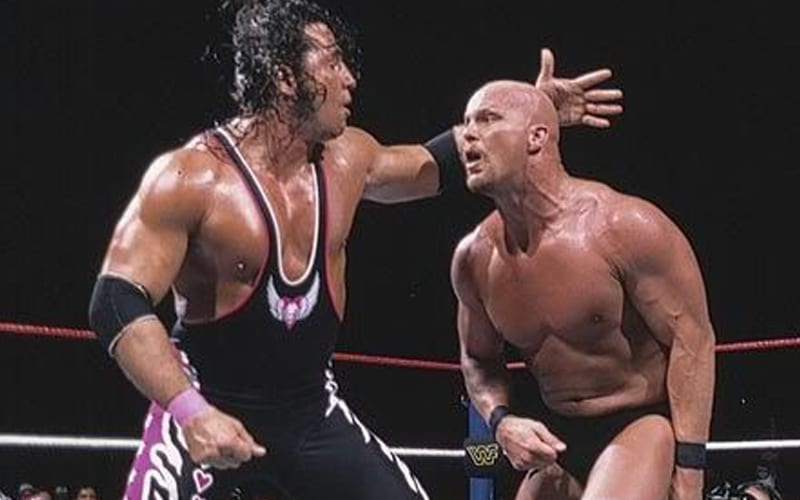 Steve Austin and Bret Hart had an epic battle at WrestleMania 13, but Hart remembers the feeling out process as a bit nervous on Austin’s part. During a recent appearance on WWE Backstage, Bret Hart stated that The Rattlesnake had a love of nerves going on prior to their WrestleMania feud.

Hart stated that he had worked with Steve Austin in a few matches prior to their big program. None of them were huge contests. The Hitman went on to explain how Austin was “anxious” to face him as he was still trying to find himself.

“I had wrestled Steve a few times before, but not in any big matches,” Hart began. “I actually was really looking forward to working with Steve. I would say back in those days that [1996 Survivor Series match] was the first real consequential match that we ever had. I would think that in all fairness to Steve, he would get a little nervous. He was pretty intense. Anxious — I think — about working with me.”

“It showed when I worked with him that he was going to come at me with everything he had, at the same time I could tell that he was nervous, if that is the right way to put it. There was a little bit of nerves there that I sensed — later on when I worked with him that he didn’t have. He was still maybe finding himself a little bit. It was one of my favorite matches that I had with Steve it was very close, or on par, with the match we had at WrestleMania 13.”

Steve Austin saw this and he had to correct Bret Hart. He explained that it wasn’t about him being nervous at all. He was simply “running on the edge of a razor blade” as his confidence was “sky high” before facing The Hitman.

No, not nervous. Just running on the edge of a razor blade. Confidence was sky high. Intensity was on point. Great time working with the best there is, was, and ever will be.

Steve Austin and Bret Hart seem to remember certain parts of their time together differently. One thing they can probably agree on is their WrestleMania 13 match was a fantastic piece of storytelling.

It’s understandable if Steve Austin was bit nervous before working with Bret Hart. He claims that wasn’t the case at all and we have no reason not to believe him, because Stone Cold said so.