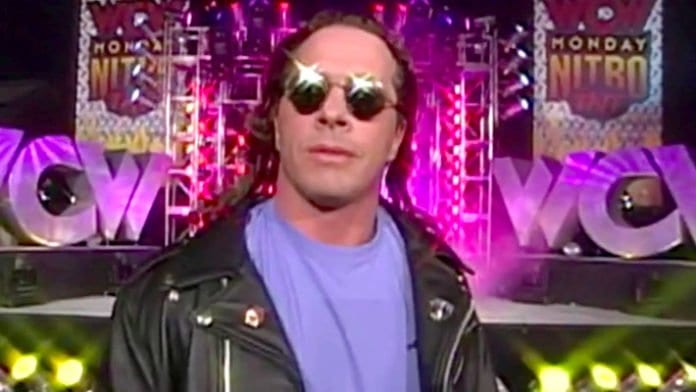 Bret Hart’s WCW run wasn’t great, to say the least. The Hitman arrived in WCW fresh out of the Montreal Screwjob but his momentum died a slow death in Ted Turner’s company.

Hart was a special guest on this week’s episode of WWE Backstage. On the show, Hart made a confession about his WCW run, and honestly, it was a long time coming.

Hart said that Vince McMahon once told him that WCW wouldn’t know what to do with a Bret Hart.

The funny thing about it was, I remember Vince saying that to me, he goes, “WCW would never know what to do with a Bret Hart”.

And you know it’s like, 3-4 months there, I realized how incredibly true that was. They didn’t really didn’t know what to do with me, they had no appreciation for my skills or my abilities. I remember often going to Eric Bischoff and going, “How about throwing me in with this guy, how about putting me in with Booker T or how about I do this”.

And they would always come up with the most lame reason why I couldn’t wrestle [Booker T] because you were working with somebody else or something like that. I remember going “That’s not even a reason”. They didn’t really know what they were doing and I am not sure what the politics of all that was.

Booker T then said that WCW didn’t want anyone else to outshine the top-workers in their company. Booker then asked Bret if he would do it all over again if he had a chance.

What came next was an honest confession from The Hitman. He said that he would figure out a better way to stay in WWE and not jump ships to WCW.

If I could do it all over again, I think, I would try to figure out a better way to stay in WWE. I mean knowing what I know about WCW, I am sorry that I ever went there.

If Hart had stayed back in WWE, we could have gotten a string of dream matches between him and the Superstars that came after his WWE departure. However, Hart’s career, unfortunately, ended in WCW.

If you use any quotes from this article then credit Ringside News.