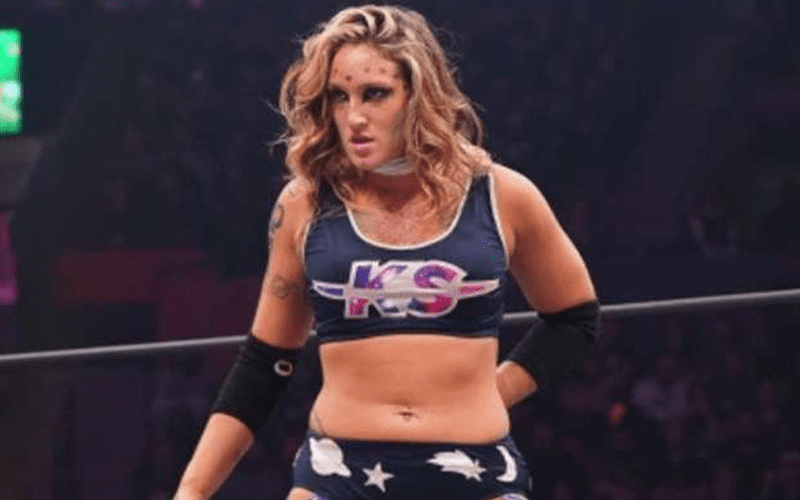 Kris Statlander is now in AEW and is one of the most popular faces of the company’s women’s division. However, at one point in time, WWE had interest in signing Statlander to a contract.

Statlander appeared on the latest episode of AEW Unrestricted and revealed what led to WWE not signing her to a contract.

Statlander said that a few tweets that she had made in the past were the reason why WWE didn’t sign her. She said that the company is very strict about these things and they flagged many of her tweets.

There was one tweet I made about how my old school got put on lockdown because police thought that a suspicious person was carrying a gun or a weapon at a gas station nearby the school. So my college went on lockdown, but it was just a guy holding an umbrella, and because I mentioned police in the tweet, it got flagged and stuff like that.

It’s very strict. There was like a fire burn thing that got flagged one time. Yeah, it’s very strict. So there was like a decent amount of thing that got flagged that was just like weird, just like out of context things [or] things that didn’t make sense. So I explain like some of the stuff is stunt stuff. Some of the stuff is not really what you expect it, what you think it is. It just highlights words. It doesn’t highlight the whole thing.

So when I responded, and I was like, ‘hey, everything that that you said was inappropriate was deleted. You shouldn’t be able to find anything. This stuff was deleted.’ I think I deleted it but like deleted it after I had already had submitted the background check, so it might have done. But that was just poor timing on my part.

Although Statlander deleted the tweets, the company decided to keep her waiting for quite some time. However, in the same time frame, Statlander received an offer from AEW to have a Dark match that led to a full-time offer.

After receiving the blessings of her trainers – Curt Hawkins & Pat Buck, who were both in WWE at the time, Statlander turned WWE down and signed with AEW.

Then they were like, ‘OK we’ll get back to you. It could be a while though,’ and during that while period, AEW snuck their little way in. ‘We want to book you for a Dark match,’ and then I was like, ‘oh, OK.’ So I did that, and then the contract offering with AEW happened. Then I re I sent an email out to WWE, and I was like, ‘hey, unfortunately, I have another offer that works with my overall life schedule a little bit better’ because I’m also a massage therapist, and I would still be able to do that and I just got my license like that year. So I don’t want to waste that, [something] that I just went to school for two years for.

They respond with something like, ‘oh what are the other offers? Are you making anything like don’t accept anything,’ and I’m like ‘you don’t own me.’ Even my trainer was like just send them like a ‘sorrynotsorry’ text, like message. You don’t have to go back and forth with them. Just kind of be like sorry, but no thanks. I think my biggest fear about going with AEW as opposed to WWE at first was that both my trainers work for WWE. Would I have their blessing to go here when I have an offer with the company they work for, and they were both like, ‘it’s a much better fit for you just go for it.’ So once I got their blessing, I was like a 100 percent peace of mind that I was making the right choice.

Thank you to Wrestling Inc for the Quotes.