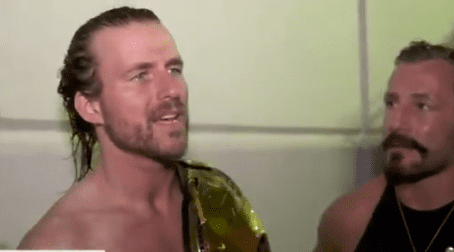 On this week’s episode of NXT, Adam Cole successfully defended his NXT Championship against Dexter Lumis. However, after the match was over, Scarlett came out with a huge Sand Clock and had a brief stare-down with Cole before heading back.

This basically meant that Cole has received a challenge from Scarlett’s boyfriend, Karrion Kross. Earlier on the same show, NXT North American Champion Keith Lee also had a tense confrontation with Cole in a backstage segment.

In a post-show backstage interview, Cole was asked about receiving challenges from the likes of Lee and Kross. Cole said that his challengers keep forgetting that he’s the Greatest NXT Champion of all time.

Cole also said that he doesn’t care if he faces a three-on-one disadvantage because nobody can defeat him.

You guys, I have been thinking about a lot of stuff. Obviously dealing with Dexter has been my priority but now, there are a lot of people gunning for my NXT Championship. I have had Finn Balor talking trash, Keith Lee trying to get in my face, and now what… Karrion Kross? Yeah like leaving… yeah whatever that thing is called… that weird clock that they are using to try and prove something to me like I will be afraid. It’s like they forget that I am the greatest NXT Champion that there has ever been. I have had this title for over a freaking year. Nobody can beat me, I don’t care if it’s three on one, nobody can beat me. I am the greatest.

Thank You to Sportskeeda for the quotes.