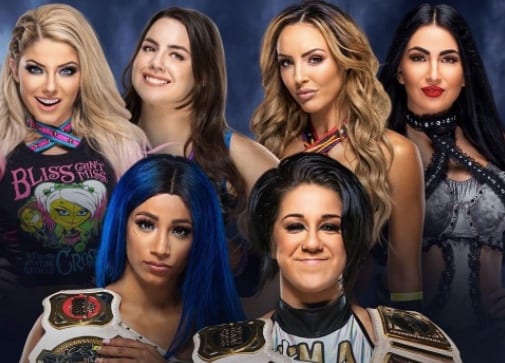 As seen on Sky Bet, the betting odds for the triple threat Women’s Tag Team Championship match at WWE Backlash have been released.

The new champs Bayley and Sasha Banks are set to defend their newly won titles this Sunday against two sets of former champions: The IIconics and Alexa Bliss & Nikki Cross.

Some may feel like it’s a match that has been a bit ‘thrown together’, but either way, you just know these six women will go out there and try to put on a great show.

The general consensus appears to be that the champions will retain with Banks and Bayley being priced at 6/5 as the favorites. The IIconics are up next with odds of 13/8, whereas Bliss & Cross are the biggest underdogs at 11/4.

It’s the kind of match where it’d be easy to see a scenario in which WWE throws a curveball into the mix, but at the same time, many fans want to see Banks and Bayley have an extended run with the titles – especially after their first reign came to an end so quickly last year.