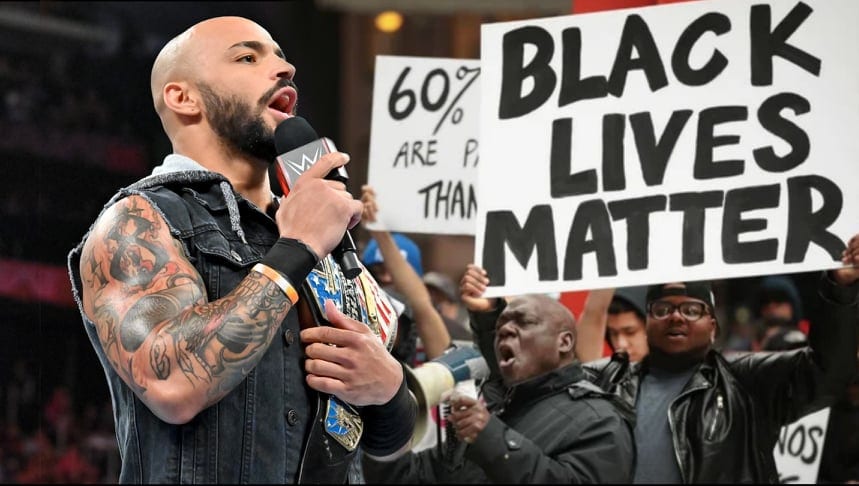 The spirit of rebellion against injustice continues to ignite within the United States as a large number of protesters continue the #BlackLivesMatter movement nationwide.

The people of the country are furious with the powers that be, particularly President Donald Trump. But Jaxson Ryker of the Forgotten Sons decided to ride against this wave and tweet out his support for the President using his wrestling catchphrase.

Ryker’s tweet was met with the fury of Drax the Destroyer Dave Batista himself who called Ryker a “sorry motherf*cker”. Kevin Owens and Ricochet also responded to the tweet with criticism and disappointment.

However, Rapper Microphone Hokage on Twitter had a problem with Ricochet’s response to Ryker. According to him, the RAW Superstar is “too nice” to people like Ryker.

Ricochet responded to the rapper by letting him know that it’s not about owing anything to anyone but rather about compassion.

Hokage then went on to state that he was met with rubber bullets and tear gas when he tried to peacefully protest in Detroit. Ricochet sympathized with him and said that it shouldn’t happen to anyone.

However, the rapper came back with another tweet in which he said that Ricochet’s “vibrant positive attitude” won’t get him “brownie points” from those who oppose his thoughts.

To this, Ricochet asked the rapper if he should burn down buildings and destroy property like many others. He also let Hokage know that his beliefs and attitude are only for himself and not to please others.

The argument then reached a point where the two men felt like they were making judgements about each other based on presumptions. However, the two agreed to disagree and accepted that they have different opinions about this situation.