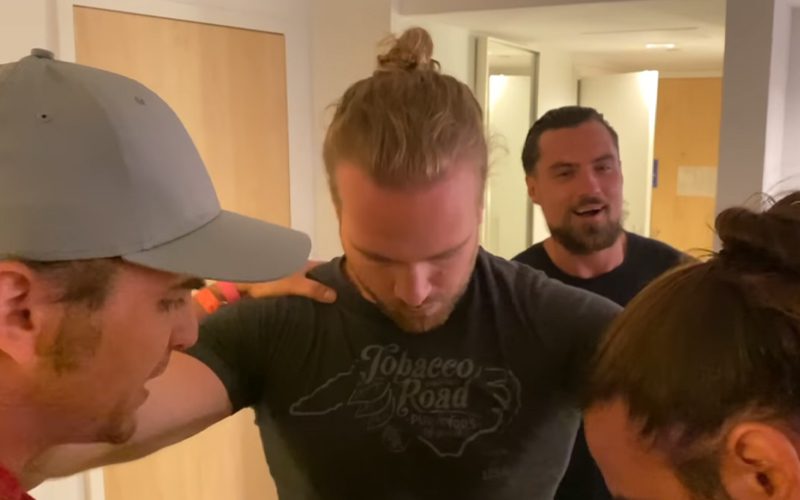 Marty Scurll signed a new deal with ROH that puts him in a very good position with the company. He is a part of the booking and he can work in other companies as long as those deals can be arranged. ROH is Marty Scurll’s primary wrestling company, but his appearance in the NWA could be followed by one in AEW sooner or later.

This week on Being The Elite, Marty Scurll re-appeared, but his presence didn’t bring the excitement from The Elite that he probably hoped for.

The Young Bucks and Hangman Page were trying to hype themselves up. They wanted to have that fire like they did in the old days and Matt stated that something’s been missing. Then Marty Scurll walked in wearing a face mask.

The Elite didn’t realize that The Villain was next to them. Then he took off his mask. They still didn’t seem to know who is was. They totally ignored him until Marty Scurll said: “I’m back baby!”

Matt Jackson told him to “leave the steak over there” because he apparently thought Marty Scurll was delivering their food.

“British waitress, shut up, we need to find our edge and we’re almost there,” Nick Jackson snapped when Scurll tried getting his attention. Hangman Page didn’t seem to know who Scurll was either.

Marty Scurll finally left as The Young Bucks and Hangman Page continued to figure out how to get their old edge back. Let’s see if this was a one-off skit or there could be more to come.

You can check it out below. The scene starts at around the 32 minute mark.