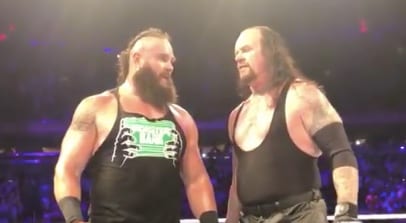 We’ve all seen a human side to The Undertaker in the last few weeks courtesy of The Last Ride documentary series, but some have been seeing that side of him for much longer.

While they may not have had an extended feud with one another, Taker and Braun Strowman have had a handful of interactions since the Monster Among Men made his presence known on the main roster.

Braun himself took to Twitter last night to give his own thoughts on what that experience was like for him.

Some will argue that the manufactured nature of the tweet doesn’t really stack up to how Braun usually uses social media, but either way, it’s great to see.

We all want Taker to have that one last match which can really do him justice, and maybe, just maybe, Braun will be involved in some way.