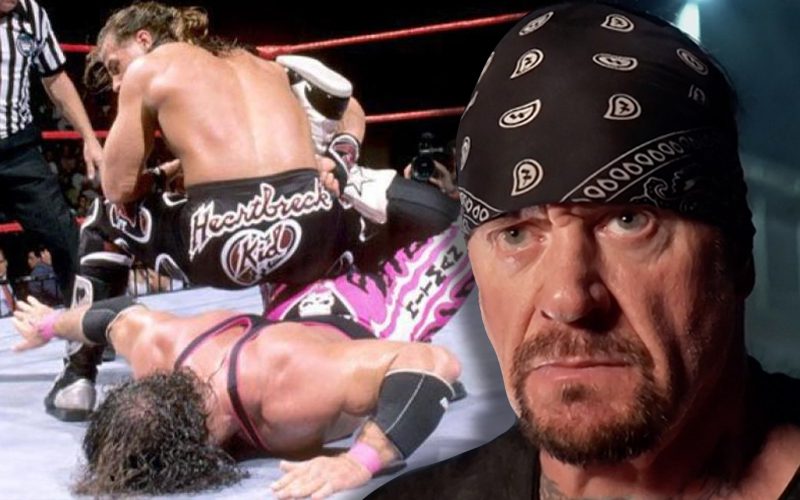 The Undertaker was backstage at the Survivor Series in 1997. He saw the Montreal Screwjob happen backstage, and he wasn’t happy about it at all.

While speaking to Bill Simmons’ podcast, The Undertaker went into the real-life feud between Bret Hart and Shawn Michaels. The Deadman stated that he didn’t get involved because Bret had seniority. He was a “quiet leader” of the locker room and took pro wrestling very seriously.

Shawn Michaels recently opened up about his real-life friction with The Undertaker. It’s no wonder why Taker didn’t talk to HBK about it.

“No, see, at that time Bret, you know, so Bret had more tenure than me at that time especially. So there’s certain guys like, you know. Now, I always got along with Bret, but Bret really [was] more kind of a quiet leader. He took the business very seriously, and you know, that’s kind of the way he led. So that part, I had to be kind of careful. Because I didn’t have, you know, I wasn’t there long enough yet to just say ‘Hey man, you guys need to cut the s**t.’ I wouldn’t mind breaking it up, but there I was still — like I said, Bret was more tenured than I was and there’s that whole respect level with me and the guys that come before me.”

When it came to how The Undertaker reacted to the actual Montreal Screwjob, he was pissed about it. He saw Vince McMahon take something from Bret Hart when he didn’t rightfully lose it. In the end, it was all about business.

“Yeah, it was, ah — I was pissed. I was pissed about the whole thing. Because I felt like, there I possibly could have been used to get what we needed. Like you know, take Shawn out of this, let me do it, and then I’ll do business on the other side. And I think Bret probably would have went for that. I mean, there was such disdain at that time between the two of them. And Bret was was going, you know, Bret was leaving. But I was just kind of, at that point I was like, ‘If you’d just kind of come to me with this too.’ And I mean, it’s his company and he did what he thought what was best, but I was like ‘Dude, I think I could’ve helped this whole thing out. I’m right here, and you know I’m going to do business.’ But it happened, and I was really pissed.”

The Montreal Screwjob didn’t have to be a screwjob at all, but Vince McMahon made his decision that will live on in history. It’s interesting that Earl Hebner is now saying years later that the whole thing might have been a work.

Hebner is one of the few people who think it wasn’t a shoot at this point. The Undertaker certainly seemed to think the events were real.