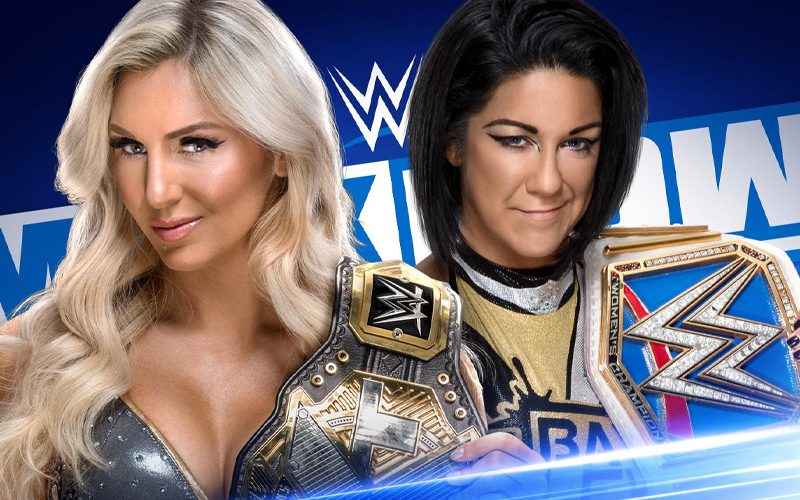 Bayley and Banks were backstage. Bayley told Banks that she doesn’t want her in her corner for her match against Flair. She said it’s because people are saying she can’t win without her.

This is a Champion vs Champion match, but neither title is on the line.

Charlotte Flair started by roughing Bayley up. She yelled about how Bayley isn’t ready to face her. Bayley slammed Flair down and then got a quick cover, Flair kicked out and Bayley did the Flair strut while going “wooo.”

They showed Banks as she watched from backstage.

Bayley and Flair traded positions on a waistlock, and Bayley tried to get a pin with her feet on the ropes, but the ref immediately caught her. Flair tried it, but Bayley kicked out and the referee didn’t see her.

Flair did her dad’s flip over the ropes off an Irish Whip and Bayley and Flair started fighting on the floor.

Flair threw Bayley over the barricade, grabbed Michael Cole’s headset and told Banks to come out so she can kick both of their asses.

When we came back from commercial, Bayley fought her way out of a headlock. Then Flair gained control. Flair missed a big boot and went over ropes to the floor. Bayley kicked Flair in the the post.

Bayley shoved Charlotte against the barricade and the apron before returning to the ring. They continued in the ring and they traded quick pinfall attempts. Bayley got a headlock and was really dirty about it as she taunted Flair.

Flair caught Bayley’s cross body attempt and hit a fallaway slam. Then Flair came back with some right hands and eventually hit her neckbreaker and then she shoved Bayley into the turnbuckle.

Flair landed on her feet off a moonsault when Bayley moved and then she hit a big boot for a two count.

Charlotte went to the apron and Bayley hung her up over the second rope. She placed Flair in the corner and hit a running knee before climbing up top. Bayley jumped off, but missed the elbow. Flair got a Boston Crab on Bayley.

Bayley got free from the Boston Crab and then she hit the elbow off the top for a two count.

Bayley started yelling at the commentary table asking if they have something smart to say. Bayley chopped Flair: “BEAT ME BAYLEY! COME ON!” Charlotte yelled.

Bayley went for a Figure Four after many more chops. Flair landed a punch followed by many Flair chops.

Finally, Bayley rolled Flair up in the ropes and got the pin.

Banks and Bayley were backstage celebrating her win. They teased Banks not beliving in Bayley, but then Bayley said “naw dog I know you believed in me.” They hugged. They’re still buddies for now.

Otis and Ziggler started things out after Otis requested it. Otis smashed and splashed Dolph in the corner. Then Dolph got in the ropes and Otis had to get back. Ziggler tagged Deville so Rose came in.

Deville hit Rose in the corner and then Mandy hit a Thesz Press on Deville and pummeled her. Dolph sent Otis into the steps so Mandy went outside to check on him instead of wrestling.

Mandy got back in the ring and then Deville started leveling Rose with kicks and punches. Otis got back to the corner, but Mandy couldn’t get to him.

Deville kept Rose down in a stretching headlock as Otis rallied the “crowd” for Mandy. Rose hit a jaw-jacker, but Deville was able to recover and she fired off a few more stiff kicks to Mandy.

Rose finally hit a knee as Deville shot off the ropes. Then Mandy made it to Otis after kicking Deville off.

Otis steamrolled over Zigger and pancaked him. Then he hit two splashes in the corner. Otis did some dancing and Deville got the tag.

Rose came in and leveled Deville. Otis took Ziggler out on the outside. Mandy hit a sliding kick for a two count as the brawl continues on the outside of the ring.

Deville hit a knee and another running knee for the win. Ziggler landed a superkick on Otis after the match for good measure.

Jeff Hardy cut a backstage promo about how much the IC Title means to him. He wants one more blaze of glory.

They showed a graphic for Shad, but they didn’t mention him or discuss this terrible tragedy. Donate to his family’s Go Fund Me if you can.

Sheamus took Hardy down and muscled him into the corner. Then he pummeled Hardy around the ring with some heavy shots.

Hardy sold and draped himself out of the ring as Sheamus pulled him back in for more. Sheamus shot Hardy off the ropes, but Jeff nailed a kick only to eat an elbow from Sheamus.

Hardy launched Sheamus over the top rope and hit a dropkick. Then he went for a crossbody from the apron, but Sheamus caught him, rammed him against the ring post, and then slammed him on the announce table.

Then Sheamus yelled at Michael Cole for putting Jeff Hardy over so much over the past few weeks.

Sheamus continued abusing Hardy when we got back from commercial.

Hardy tried to duck a clothesline, but Sheamus hammered him on the second attempt. It was not a good night for Hardy.

Sheamus taunted Hardy as they showed a slow-mo video of that clubbing clothesline. Hardy landed a kick, and he hit a Whisper In The Wind. Hardy created an opening, but only got a one count from a pinfall attempt.

Sheamus hit the Irish Curse backbreaker and then he hit another followed by a third. Hardy sold like a rag roll the whole time.

Sheamus clubbed on Hardy’s chest and then he tried to suplex Jeff, but Hardy landed on his feet. Hardy moved and Sheamus posted himself in the corner.

Hardy landed a clothesline and an inverted Atomic Drop and a basement dropkick for a two count.

Hardy and Sheamus went to the floor and Hardy walked the tightrope off the barricade and into a flying clothesline onto Sheamus. They moved back in and Sheamus was in position for the Swanton Bomb, but he got his knees up.

Hardy kicked out of a two count after falling onto Sheamus’ knees. Sheamus landed a knee for another two count.

Sheamus missed a Brogue Kick, Hardy rolled Sheamus up and got the win.