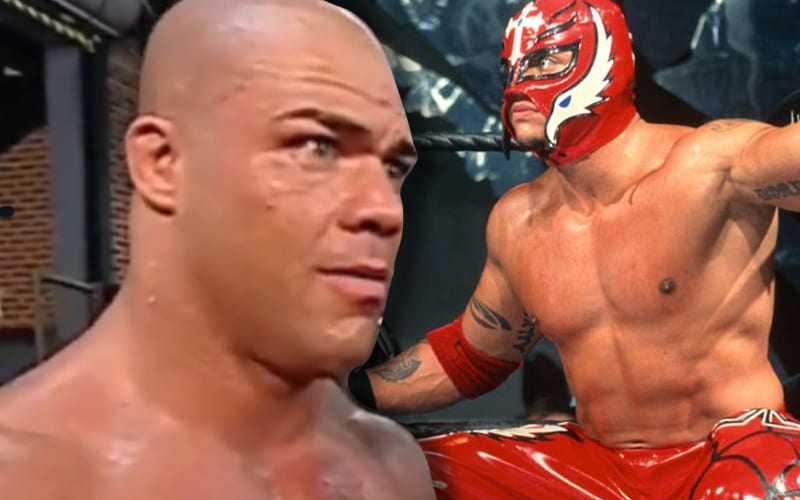 WWE has changed with the times. You could get away with saying much more on television in 2002 than in 2020, that’s for sure.

Kurt Angle saw a video from a throwback promo on Twitter and he responded while sharing it with his followers. The WWE Hall Of Famer explained that things were “a bit looser back then,” but this was “funny sh*t” that he “had to repost.”

Angle had just lost to Rey Mysterio prior to this promo and he wasn’t happy at all. He started his backstage promo by addressing how Mysterio looked like a juvenile.

“I just got pinned by a freaking 12-year-old. What the heck is going on around here? People running into my matches, people screwing me left and right.”

During this 2002 promo, Kurt Angle was then asked, “what do you mean screwing you left and right?” The more controversial aspect of his promo started after that.

“I’ll tell you what should be in Myterio’s vocabulary… ‘broken ankle’ which is something he’s going to experience first-hand courtesy of your Olympic Hero, oh it’s true, it’s damn true.”

Angle included a caption saying: “Had to repost this. Some funny shit that you can’t say anymore. This was 18 years ago. Things were a bit looser back then.”

Things were very different back then in WWE and society. They wanted to build Angle and Mysterio’s feud and the gloves were off. Promos are very tightly scripted so odds are fans won’t hear anything like that on WWE television again.

If you use the credit Ringside News