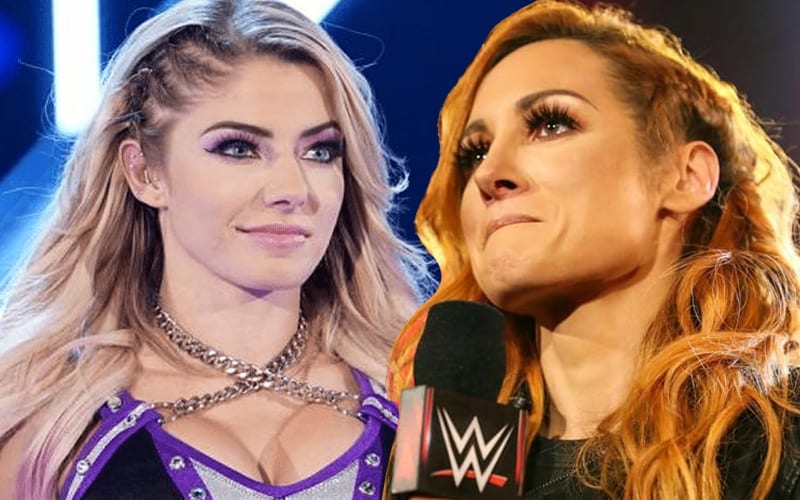 Alexa Bliss was just as surprised as the rest of us to hear about Becky Lynch’s pregnancy.

Express Sport recently spoke to Alexa Bliss when Becky Lynch and Seth Rollins’ upcoming bundle of joy came up in the conversation. Bliss had no idea what Lynch was going to announce. She found out when The Man revealed she is going to be The Mom.

It sounds like WWE plans on releasing much more footage from that day as a camera crew was following Becky Lynch around as well.

“No actually, we all found out at the same time when she announced it. Nobody knew, everyone kept it very secret which they should because that is her news to announce, which is awesome and we’re all so happy and excited for. I did reference it on Moment of Bliss and it wasn’t even on my script. So we had to add it in after because it was kept so secret, which it should be because that’s their exciting news to announce. Everyone was so excited, all the girls were smiling. It was great because she’s had such an amazing year. I said congrats and told her that we’re all so happy for her but she had a camera crew with her so I didn’t want to bug her with everything because everyone was going to come up and say something, so I said congrats and everything.”

Becky Lynch and Seth Rollins’ baby is due in December. This isn’t goodbye forever, but The Man will return when she’s ready. In the meantime, everyone in WWE is very happy for this big unexpected announcement.