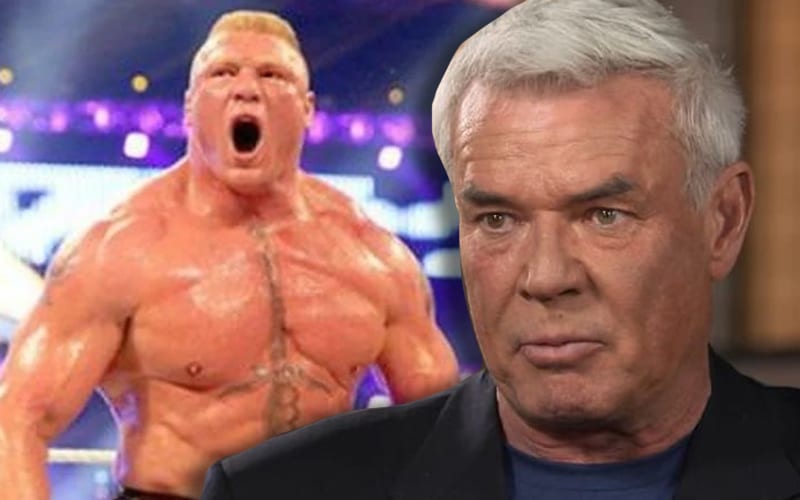 Brock Lesnar took off after WrestleMania once again. He might not be back for a while, but you also never know when Vince McMahon will call him back to work.

While discussing The Beast Incarnate on 83 Weeks, Eric Bischoff was questioned whether Brock Lesnar is worth the amount of money WWE pays him. He explained that it’s impossible to say for certain without know the actual numbers involved. Lesnar does command quite a hefty paycheck, but it’s unclear if it’s worth WWE’s money.

“You know, from our collective points of view — I’m being serious now. As fans, as people on the outside looking in, that’s a subjective [question]. First of all, how much money has he made [WWE], does anybody know? A lot, we all know he’s made a lot. But how much is ‘a lot?’ Is ‘a lot’ $10 million? Is ‘a lot’ $100 million? Is ‘a lot’ $200 million? What is ‘a lot?’ And unless you know that number, then how do you begin to, you know, come up with an objective answer to a subjective question? You can’t, you know? A), you have to know how much money has WWE invested in Brock Lesnar over those years. And the other part of that equation, if you’re being honest and not just a hater or a superfan, regardless of how you feel about Brock. If you don’t know how much money Brock Lesnar has generated for WWE, which none of us do, then how can you honestly answer that question? The answer to my question is, ‘you can’t.’

Brock Lesnar arguably has the best deal in WWE. He is a part-timer who makes a ton of money. Whenever he comes in it seems like he has an easy day at the office.

Brock Lesnar could be performing F5’s for years to come. Vince McMahon obviously continues agreeing to Lesnar’s massive contracts for a reason.