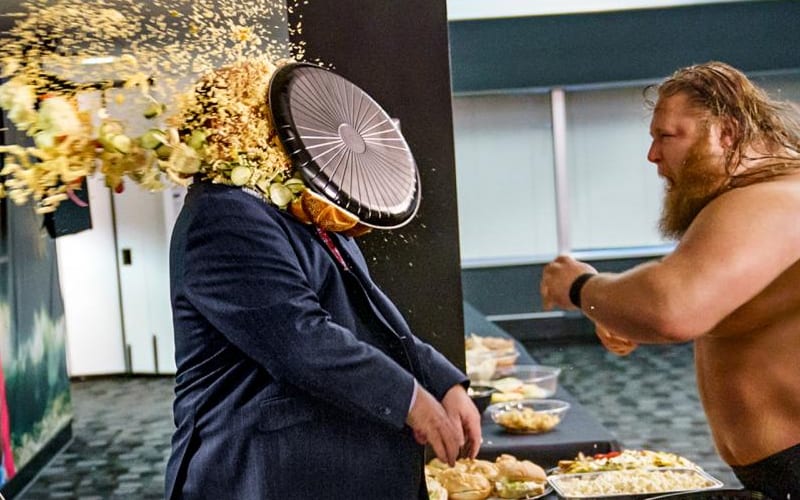 WWE Money In The Bank had a few notable cameos. For some reason Paul Heyman was chowing down in the cafeteria, but that created a big opportunity for Otis.

While speaking to Sports Illustrated, Otis discussed smashing a plate of food into Paul Heyman’s face. Heyman was all about it, but Otis still apologized for the Advocate’s suit.

“Paul was all for it,” said Otis. “I was looking around that table and said, ‘What should I toss at you?’ There was that big, massive plate with the pastas and sandwiches, and I said, ‘Sorry, sir, about your suit.’ And you can’t not throw it hard when you throw something like that, so I brought it.”

Paul Heyman was very motivating for Heavy Machinery. Otis remembered the after the first time Heyman spoke to them he wanted to run through a wall.

“I first met Paul at a promo class at NXT, and there is something about the way he motivates,” said Otis. “I remember when he first talked to Heavy Machinery. I was so pumped up I wanted to run through a wall. He’s that motivating.”

Otis is on his way toward a great run in WWE. Hopefully, he can stay healthy and motivated. He might be on a different brand than Paul Heyman, but the Advocate is obviously happy to put Otis over.