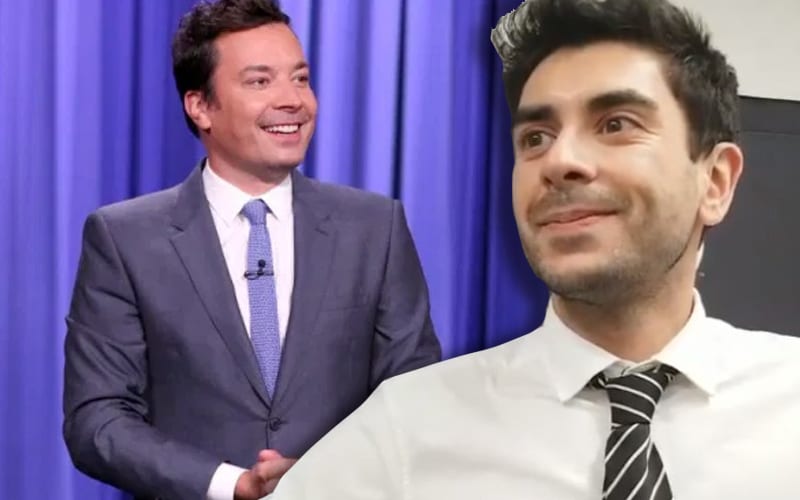 AEW Dynamite hasn’t missed a week of new programming since COVID-19 started sweeping America. They had a great idea idea to put wrestlers around the ring and provide some sort of social distancing crowd. This concept came from an unlikely source.

While speaking to AEW Unrestricted, Tony Khan revealed that he was inspired by the way Jimmy Fallon’s Tonight Show handled having no live crowd. They used the band and writers in the crowd which provided some sort of reaction. It’s better than nothing, especially when the competition is dead silence.

“The March 18th episode, what we started doing with an audience of wrestlers around the ring, when I went from Salt Lake City and decided we were gonna go out to Jacksonville, that weekend, I watched a lot of other programming, I watched a lot of wrestling and watched a lot of other stuff too, and tried to get a feel of what people were doing with the restrictions and without an audience, and the thing that really captivated me, I have a really good friend who is a writer for Jimmy Fallon and he works on The Tonight Show, and I watched the shows Jimmy Fallon was doing without an audience, and he had his writers and his band in the studio, small group of people, and their laughter, that exchange they had, it made all the difference, and I watched other talk shows where they were just out there kind of cold, and I thought the The Tonight Show and Jimmy Fallon were really on to something, and I thought, that’s kind of what we want to do.”

AEW continued putting wrestlers around the ring this week on Dynamite. They have a much larger area to work with in Daily’s Place than Jimmy Fallon’s studios as well.

Do you think AEW adding wrestlers around the ring is a great idea? Sound off in the comments below!