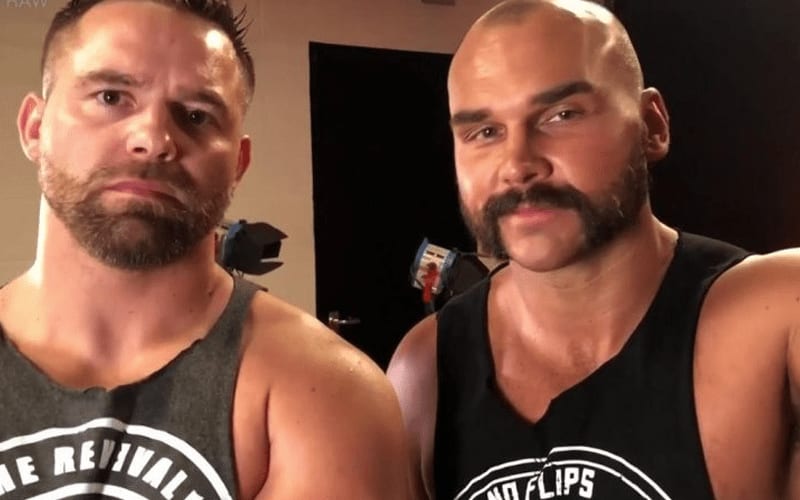 The Revival are no longer with WWE. They requested their released and they were finally granted. The Top Guys went through a lot in WWE, but Vince McMahon couldn’t get over the way they talked.

They heard from WWE early on “that you’re not going to get much promo time” because of their Southern accents. They said that they asked Vince McMahon about this and his response was “well, I’m from North Carolina!”

While speaking to Talk Is Jericho, Dax Harwood explained that he didn’t want their Southern style to be portrayed in a negative way. The atmosphere surrounding their final meeting with Vince McMahon included The Chairman calling attention to how intelligent they speak.

“The last meeting we had with Vince, which was crazy we were talking to him and telling him our grievances and he said, ‘man you guys are so well-spoken! We can send you out into the world and you can do all these meetings and meet & greets!”

Cash interjected that Vince said: ‘you could do Good Morning America.’

Dax said that Vince McMahon couldn’t believe that they could speak to the public. Cash then continued to say that any interaction they had with Vince went well, but they obviously didn’t get what they wanted out of the situation.

“Like Dax said, any time we had interaction with Vince they always went very well. He was open and he would listen he was very responsive and complimentary to the point where we were taken aback sometimes that he was aware sometimes that we weren’t aware that he would be.”

“It wasn’t just a Vince thing. A lot of upper management there think that with a Southern accent you’re only going to go so far.”

During the interview, they also confirmed that the photos that leaked from Bodyslam.net were 100% legit. Vince McMahon really handed them that concept art and tried to pitch it to them as a new comedy gimmick. He really wanted them to wear lipstick on television.

Are Cash Wheeler and Dax Harwood better off after WWE? Sound off in the comments below!