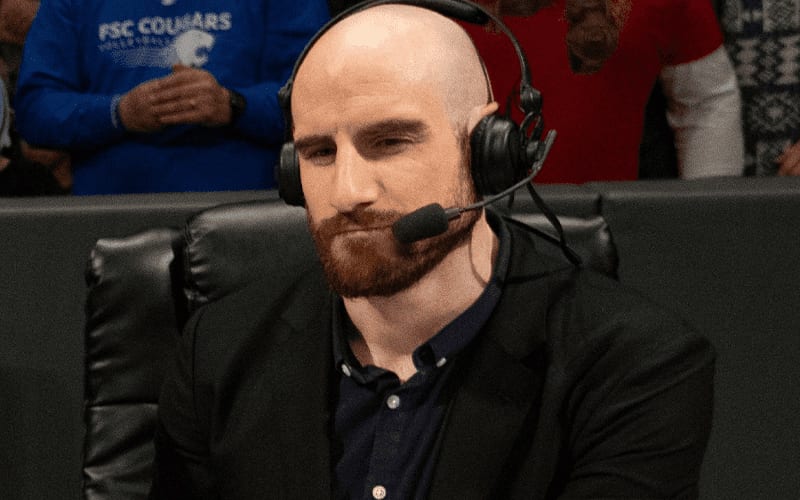 Aiden English’s final role in WWE was as a commentator on 205 Live. He had no plans to retire from in-ring competition, but his services were needed in the announce booth. English saw a lot on 205 Live during his time with the show. He also realizes how much WWE cares about the cruiserweight brand.

205 Live is now under the NXT umbrella. Moving the show under Triple H’s control meant that Adam Pearce could run the show, but they are still a part of WWE and under Vince McMahon’s ultimate direction.

While speaking to Inside The Ropes, Aiden English discussed how WWE treats 205 Live. They might not be on the top of the totem pole, but if WWE didn’t care about 205 Live then it wouldn’t exist.

“People love to feel like someone is getting screwed by the man. I think there was a feeling of that from people who love 205 Live that it was getting brushed to the side. You don’t have to be a genius to see that it wasn’t going to get the attention of Raw and SmackDown, those are the flagship shows. Those need the majority of the attention, that’s where the revenue is coming. You’re talking about a huge production company…if it’s on your television, people care about it. At the end of the day, they’re not going to take the time to put us in the same arena as SmackDown every week, put the talent out there, produce, edit…they’re not going to do that if they don’t care.”

“Where it’s at on the hierarchy of shows, it probably wasn’t at the tip-top. But guys like Mustafa Ali were trying to push it further and that’s what made it fun. That’s what makes a lot of WWE fun. Before NXT became NXT, we were doing the same thing. It gives guys motivation. If they didn’t care, it wouldn’t be on television.”

205 Live has looked much different since the pandemic started. WWE’s cruiserweight division is still trying to figure out who is the next NXT Cruiserweight Champion through a round robin tournament. Jordan Devlin had to be stripped of the title when he could no longer make it back for title defenses.