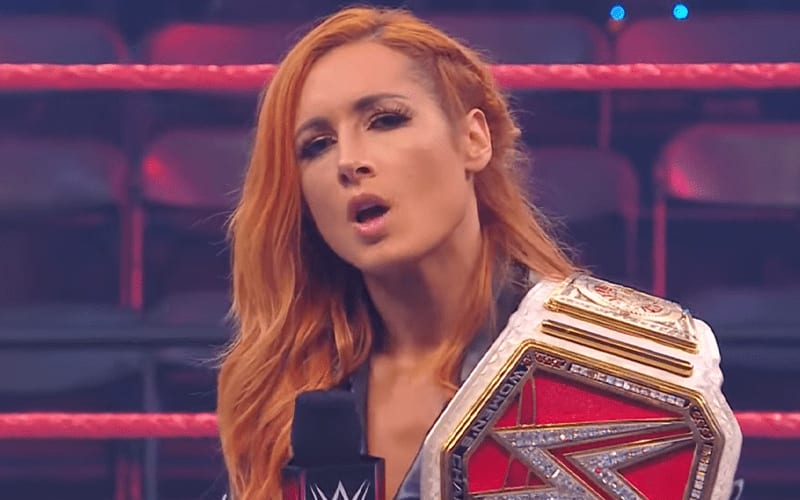 Becky Lynch has held the RAW Women’s Title for well over a year now. She’s not Becky Two Belts anymore, but she never dropped that red title since WrestleMania 35.

While speaking to WWE The Bump, Becky Lynch addressed the idea that she is “unbeatable.” She stated that as soon as someone starts thinking that they can’t be beaten, that’s when it happens. She’s used this exact same mindset against opponents in the past and The Man doesn’t want it to be her own downfall.

“I think that’s arrogant to assume that there’s not anybody [who can beat me]. Because I think the thing is, that once you start thinking that you aren’t beatable? That’s when you’re defeated. It even came up with Shayna. When she thought she was in control? That’s when I beat her. That’s when I rolled her over, that’s when she was most vulnerable. So I think you always have to stay on the ball and like I said in my last promo on Raw? Whoever thinks they can beat me? I’m challenging them to take that MITB briefcase. Pick a time and place, then I’m going to shock the world again.”

Becky Lynch will defend the RAW Women’s Title against any challenger coming her way. It doesn’t matter who wins at Money In The Bank this year because Becky Lynch seems ready for all possibilities. She is also aware that she could lose which probably gives her even more drive to succeed.

How long is Becky Lynch going to remain RAW Women’s Champion? Sound off in the comments below!