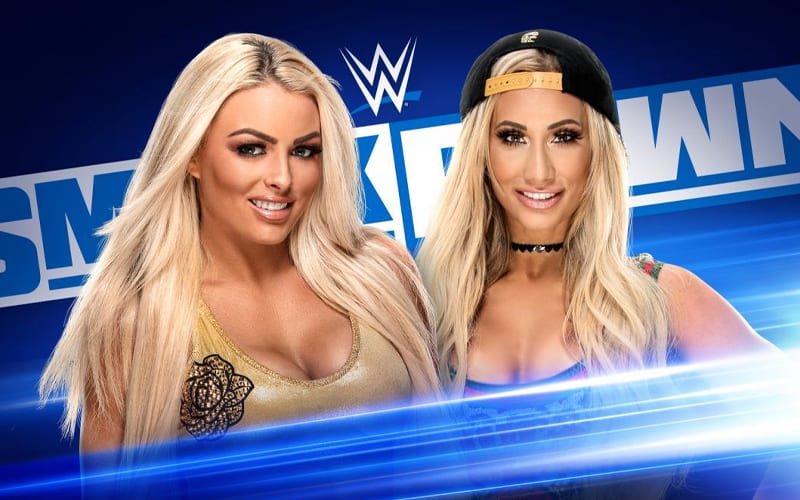 Sheamus won very easily. They hyped Sheamus’ tension with Jeff Hardy during commentary. Sheamus had a bit of fun with his enhancement talent. He beat on his chest in a major way before setting him up for the Brogue Kick.

After the match was over, Sheamus stalked Michael Cole again and trash-talked Jeff Hardy before they played another part in his on-going series of vignettes.

Cole said that Hardy will be on SmackDown next week. Sheamus said so will he.

They had a little exchange early on where Mella took control. Then she moonwalked away. Mella nailed a kick of the head for a two count. Then she continued to keep Rose down.

Mandy bodyslammed Carmella for a two count before latching on a chinlock. Then Sonya Deville’s music hit. Sonya came out on a microphone and was distracting while talking about their friendship.

This time last year Sonya gave Mandy Rose her MITB ladder match spot. Mandy nailed a backbreaker on Carmella as Sonya droned on. Mandy said that Carmella is probably going to beat her. Then Mella hit a spear while Sonya said she’ll just watch the show.

Then Deville went off on Rose she “karma’s a bitch, bitch bring it on.” Then Carmella hit a superkick and won.

Deville rushed the ring and destroyed Mandy Rose. She bounced Rose off the ring post and the stairs. Then Deville landed another stiff kick.

Otis went to go check on Mandy Rose. She was rather beat up.

Otis ran into Dolph Ziggler in the hallway. He asked Otis if Mandy is okay. Otis didn’t say anything. He just stood there and breathed heavily.

The New Day vs Forgotten Sons

The Miz and Morrison came out before this match could start. Then they took a seat on commentary. Corey told Cole that they want nothing to do with him so he can keep his social distance.

Steve Cutler and Big E started it out. Big E overpowered Cutler and tagged Kofi. They continued to battle back and forth, but Kofi hit a dropkick in the corner.

The Forgotten Sons started tagging in and out as they continued to work on Kingston. Then Big E got the tag and he hit a couple belly to belly throws on Wesley Blake.

The New Day took control when we came back from commercial. Big E hit a splash for a two count. Then Cutler went around the ring, but Big E got back in. Then Wesley Blake nailed a suicide dive on Big E.

The Forgotten Sons got a double team and a two count as Miz and Morrison trash talked them on commentary.

Big E started taking a lot of submission and pummeling damage from Blake. Then Big E put Wesley Blake into the corner. He isolated Big E so he couldn’t make the tag. Suddenly, Big E landed a uranage and got a tag off to Kingston.

Big E went for a spear to the outside, but he missed. Then Big E was sent into the ring steps on Raw for good measure. The Forgotten Sons hit two more dominating tag team moves. Then the Forgotten Sons pinned the champions clean.

Tamina Snuka cut a promo backstage saying that it took 4 women to beat her at WrestleMania. She won’t be intimidated and then Banks distracted Tamina so Bayley could jump her. They sent Tamina into some crates backstage and Lacey Evans ran up to fight Banks. The did a huge pull-apart backstage that was a lot of people all over each other during social distancing.

Sonya Deville said that Ziggler will screw Otis out of his spot too. Ziggler said he’s not a buy guy just because he sees how the world works. He said “guts like Otis” get sympathy likes and they start to believe that means more than talent. Ziggler cut an amazing promo here about how he’s gonna win and go on to win MITB, again. He plans to make Mandy Rose “Feel better” after her beatings from Deville.

Otis took a beating to Dolph Ziggler early on. Ziggler sold like a champ. Then Otis sent Ziggler into the turnbuckle.

Dolph finally moved out of the way during a charge to the turnbuckle and Otis went to the floor.

The continued and Otis took control. Dolph sold for a bit, They continued on and both ended up on the mat after a Zig Zag. Suddenly, Otis caught Ziggler and he hit a throw and a Caterpillar and then he got the win.