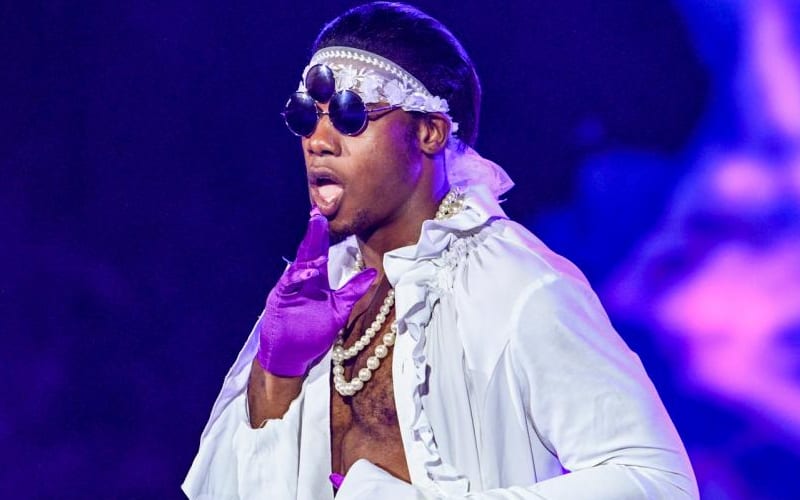 Velveteen Dream had some pretty serious accusations surface about him recently. He allegedly sent a nude photo to minors over Instagram DMs. He later denied these allegations and claimed that the photo was stolen.

A third party is said to be investigating the matter. We’ll have to see what they uncover. In the meantime, it’s unknown if Velveteen Dream will continue appearing on NXT every week.

During Jim Cornette’s Drive-Thru, Cornette addressed Dream’s situation. He stated that if cell phones existed in the 1980’s then a ton of guys would have been arrested and/or divorced within weeks. The problem with guys today is that they don’t know “when to cover their sh*t up.”

“I’ve always said, if there were cellphones in the 80s, that none of the guys would, all of them would have been in jail and or none of them would have been married longer than two weeks. But these f*cking guys today, they don’t know how to cover their sh*t up. You don’t f*cking call from your, even before there was such a thing as caller ID, there were phone bills that you got on paper, you never call a girl from your house, you always go to a payphone and you don’t use a f*cking calling card in your name, if the bill comes to your house, you use f*cking change and pay for it as you go along, and you definitely don’t say things on answering machines or voicemails, you don’t let compromising pictures be taken past a picture in a parking lot at the f*cking local 7-11 of you and fans.”

“I’m not saying whether it’s right or wrong, I’m saying that’s something you would probably want to cover up, so I’ll just use my own phone with a traceable phone number, my own f*cking gimmick account, whatever, and why don’t you get the goddamn evidence notarized while you’re at it just to make it easier for everybody.”

Velveteen Dream denied all allegations against him, but he didn’t address the alleged audio of his voice asking “what school do you go to?”

Jim Cornette sounds like he has plenty of experience covering up for questionable decisions on the road as well. Perhaps Velveteen Dream needs to ask for Corny’s veteran advice next time, if there is a next time.

What do you think is going on with Velveteen Dream? Was he hacked? Sound off in the comments below!