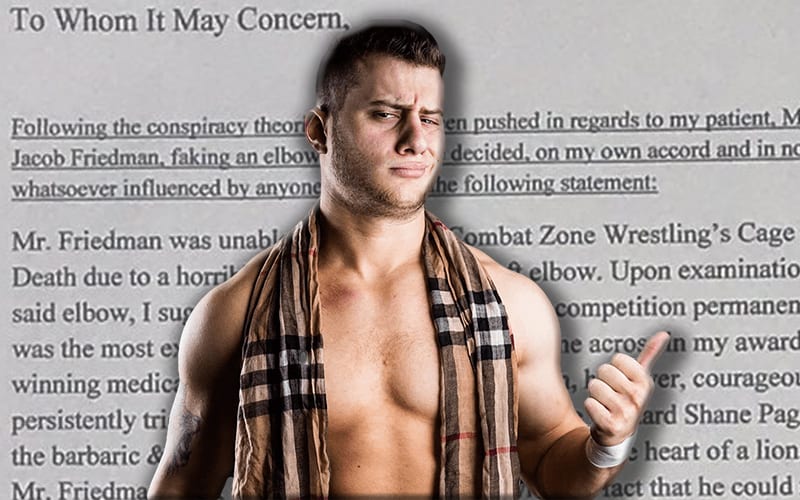 MJF announced on Dynamite last week that he is out of action due to a terrible injury. He has a hangnail that got out of control. The problem is that nobody believes him.

The Salt Of The Earth jumped on Twitter to address his doubters. He said that this current generation is soft and they have no idea what real pain looks like.

This generation is soft. It’s honestly sickening. You have no idea what real hardship or pain looks like.

MJF received flack for this, but then he shared a note that is supposedly from his doctor Samuel Seth Friedberg. This note stated that due to the severity of MJF’s injured elbow he suggested that the AEW star hang up his boots for good.

“Upon examination of said elbow, I suggested that he retire from in ring competition permanently. It was the most extreme elbow fracture I’ve ever come across in my award winning medical professional career. Mr. Friedman, however, courageously & persistently tried to convince me to clear him.”

It was said by his “doctor” that MJF’s recovery time was “miraculous.” In fact, MJF over-healed his elbow. The same cannot be said for his hangnail as it was “life threatening” according to MJF.

AEW will tape content once again during the first week of May. Hopefully, MJF will make those tapings. We previously reported that a few AEW stars are already quarantining in preparation.