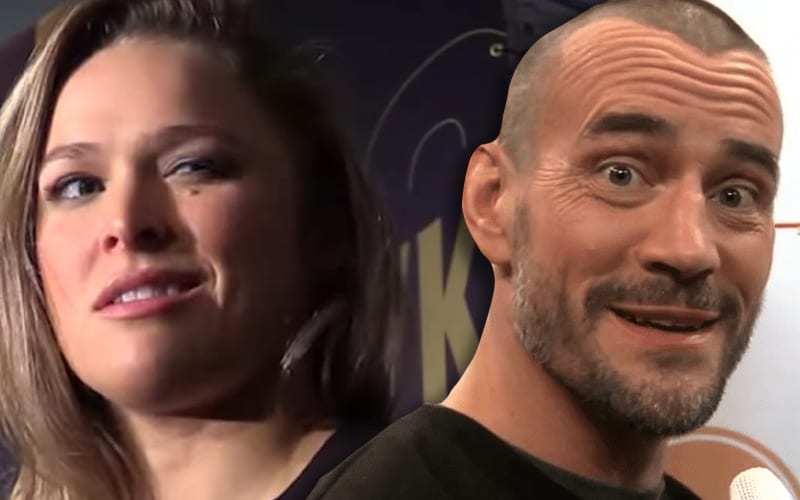 Ronda Rousey created a new batch of headlines for herself when she told Steve-O that she’s not coming back for ungrateful wrestling fans. She said “f*ck those fans” as she called WWE fake fighting. This upset a few people in the process.

During WWE Backstage, CM Punk gave his opinion on the matter. He said it’s not going to end well because once you’ve established that someone is real as opposed to phony then “you’ve fallen through the water” making it impossible to skate around it.

This situation is still getting plenty of people to talk about Ronda Rousey. That shows she is still very much in control of the situation. Things might get chaotic, but CM Punk loves it.

“She’s doing her job. Listen, I love this. This is pure chaos and I don’t see this ending well whether it’s real or scripted, but it’s gonna be fun to watch. It’s fantastic watching everyone bite on it. It’s fantastic watching everyone get butt-hurt about it. You know, people say Ronda’s soft because she got knocked out twice. They say she’s not a real fighter, but then they say she’s not a real wrestler, but the whole time they don’t realize that she’s got them all right here — they’re all wrapped around her little finger.”

“When I think they’re gonna get into trouble with this is when you say I’m real and what I do is real and everything else is phony then you’re not on thin ice anymore. You’ve fallen through the ice and you’re in the water so it’ll be interesting to see if they can tip-toe around that. But, Ronda’s getting people to talk we’re here talking about it right now and I love it.”

CM Punk was very entertained by what Nia Jax said about Ronda Rousey. It took him a moment to stop laughing after Renee Young read the tweet where Jax threatened to knock Rousey out for real.

It is also interesting that WWE used Ronda Rousey in the storyline during RAW this week.

Do you think WWE is preparing fans for a Ronda Rousey comeback? Are you upset at Rousey for her comments? Sound off in the comments below!