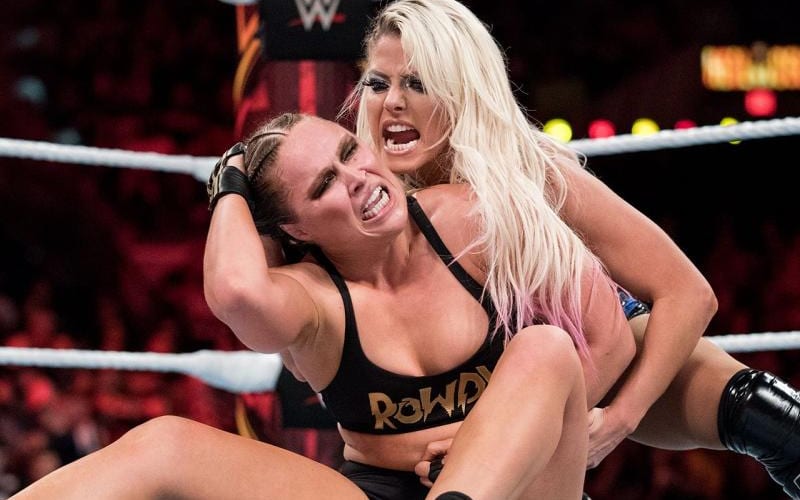 Ronda Rousey caused quite a stir as she spoke to Steve-O about pro wrestling. She didn’t feel like returning for “ungrateful fans.” WWE even used those comments in the storyline during RAW this week.

CBS Sports recently spoke to Alexa Bliss where she was asked about The Baddest Woman On The Planet’s recent comments on pro wrestling. To call it a “fake fight” was offensive, especially for people like Bliss who suffered injuries during those “fake fights.”

Bliss already tweeted out in response to Rousey’s comments. She had a chance to elaborate in a form that allowed for more 280 characters.

“I’ll just start by saying I like Ronda. We’ve always gotten along, I have a lot of respect for her and what she does and what she’s been through. What she does in MMA and UFC, I’ve always been super supportive and everything like that. It was just the use of the word ‘fake.’ Especially because we welcomed Ronda with open arms. We all wanted to see her succeed, and whenever we would have a match, we would respect her UFC background and respect how she did certain things. We wanted to make an amazing story with amazing matches while meshing both styles of WWE and UFC together. I thought every girl that worked with her did an amazing job of that.”

“But, with that, we had a whole documentary based on my concussions and how I didn’t know if I was ever going to be medically-cleared. The thing is, you know, you’re only as good as the person you’re in the ring with. When you kind of bash the fans who were always really supportive and say what we do is fake, it’s kind of disrespectful when we were so respectful of what she did coming in and we were respectful of her in WWE. Everyone was willing to help her succeed, you know? She did a lot for us, but we also did a lot for her. A lot of bodies laid on the path she walked on. So, to say what we do is fake is really unfair. Yes, the finish is scripted, we say that; it’s protagonist, antagonist and conflict resolution. It’s a story we’re telling. My whole thing is … if she comes back to WWE? Great. We would all love to work with her again, I’m sure. Just limit the use of the ‘F-word.'”

The revived discussion about Ronda Rousey has caused some to wonder if WWE might be preparing fans for her inevitable return. Bringing those statements up to Shayna Baszler last night during RAW only to receive a cold stare was very interesting as well.

It was previously reported that Ronda Rousey is expected to work WrestleMania 37 when WrestleMania Goes Hollywood.

How would you book Ronda Rousey’s return? What do you think about her statements? Sound off in the comments below!