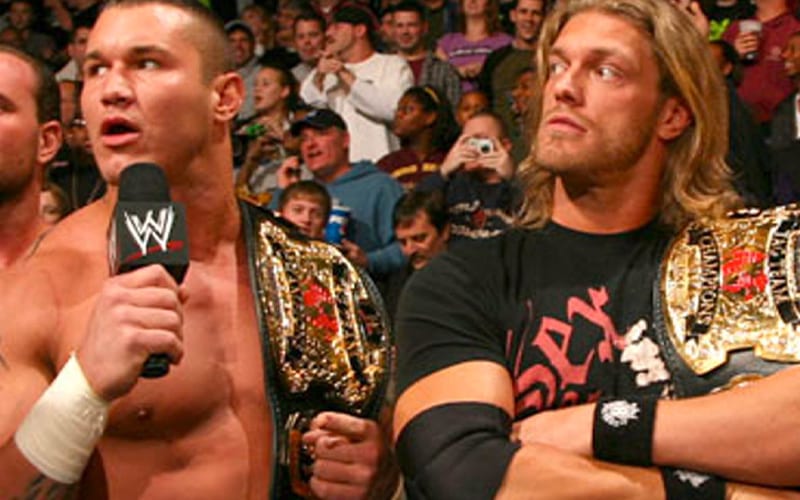 Former WWE Superstar Amy Weber told a story recently about a very unfortunate incident in WWE. While on an Alaskan tour with the company, Weber thought she cracked her tailbone. She could still walk, but she said it really hurt. After going to the trainer, he asked her to go get some ibuprofen from the men’s locker room, which she did.

Things got much worse for her on the flight as she revealed that Randy Orton knocked her to the floor. Edge was apparently a part of it too as he allegedly poured a drink on Amy Weber while she was sleeping.

“On our way back in Alaska because we had more TV to tape there, I was laying across three seats. We were all sleeping and I’m gonna go ahead and call people out because this is a truthful video — Randy Orton decided to come up behind my chair like a linebacker and he slammed into it so hard that I landed on the floor or the airplane. Then he said to me, ‘You’re gonna learn ***** ****. I didn’t understand what he was talking about.'”

“I turned around and I went back to sleep. I was awakened by someone pouring a drink in my face so immediately I popped up and I saw Edge — yes, you Edge with a partially drank drink in his hand with a little bit left and it was the same color that was basically all over me. I stood up and I said, ‘do you have a problem with me?!’ He denied it, but the drink was in his hand.”

“So I said, ‘Let’s go fight me! You wanna be a man? Let’s go. Fight me!’ and he kept denying it, but I know he did it. But he had the drink in his hand. At the end of the day did I deserve it because I took two ibuprofen that the trainer told me to take and get some ice from the men’s locker room? I don’t think so. Just as a human being. As a decent human being you just don’t do that to people.”

Weber went on to say that she never thought she was better than anymore, but she always wanted respect. Amy Weber says that she always treated others with respect. Apparently, it wasn’t a two-way street.

When they got to Alaska, Amy Weber said that Shane McMahon was there, so she informed him that she quit. An unfortunate part was that she was already scanned for an action figure and WWE’s video game.

In the end, she never actually signed a contract because Vince McMahon wanted to own her legal name which was something she wasn’t comfortable with either.

What do you think about this story? Sound off in the comments below!