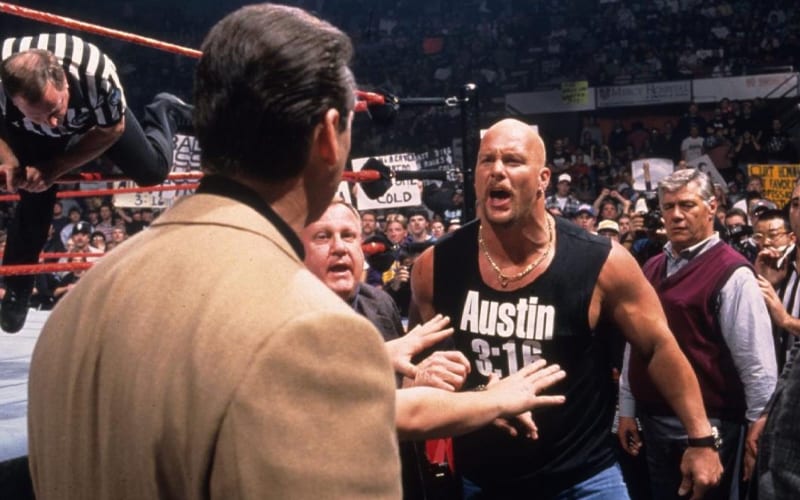 Steve Austin and Vince McMahon had one of the biggest rivalries in the Attitude Era. Fans cheered as they lived vicariously through the Rattlesnake while he took his boss to the woodshed time and time again.

The matches between the two were tightly choreographed, but Austin recently revealed to ESPN that there was some improving.

Steve Austin and Vince McMahon needed to be on the same page during their matches. When he comes to how it was to work with Vince McMahon, Austin had to admit that The Chairman was a bit awkward due to his unique attributes.

“From a mechanics standpoint, you know, Vince is pretty awkward and you know he’s jacked up, he’s strong. The stuff he does in the ring, everything feels pretty good. He’ll sling you, when he’s going to throw you, he’s going to throw your ass, but he’s kind of clumsy. The thing I love about working with Vince was his character was so over. As a heel, that guy is a natural born performer. He is probably the greatest promoter that the sports world, or sports entertainment, has ever known, but as a worker, as a performer, he knows how to work a crowd… Vince can read a crowd and he plays to that crowd and he just loves to be, as a heel, he would love to be hated so much.”

Steve Austin and Vince McMahon created many memories that fans will never forget. Their feud is one that many fans still rank among their favorites. It took a lot of work, but the chemistry between the two was undeniable.

What do you think is the best rivalry in WWE history? What’s your favorite Austin/McMahon match? Sound off in the comments below!