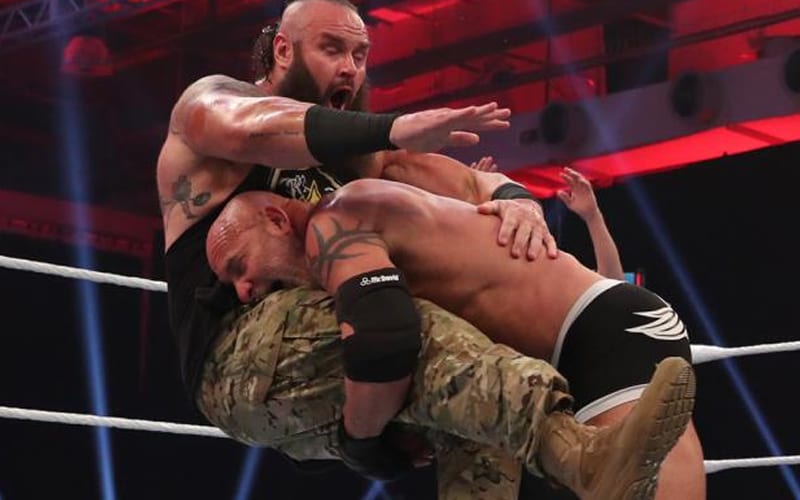 WWE thought about filming Roman Reigns vs Goldberg after WrestleMania 36 was already filmed. They couldn’t make things work out so WWE aired Braun Strowman’s victory instead.

While speaking to Carcast, Goldberg said that he went home, and he just started to take it easy. Then WWE called him to say that the Roman Reigns match might still be a possibility.

“You’ve seen me go through this stuff. Can you imagine me being done on Friday. My obligations were complete for the year. My second match was already wrestled. So I was literally done. So I come back here on Friday and jump on the tractor, and eat as many Bon Bons and Uncrustables and Coke, drink as many Cokes and don’t go the gym for five days. And then I get a phone call in the middle of the week that it’s still a possibility.”

WWE waited until the last minute to announce the WWE Title match change because there was still a possibility that things could be worked out with The Big Dog. He didn’t work the match and Goldberg wasn’t required to come back, but there was time when it wasn’t out of the picture.

“[The Roman Reigns match] was still a possibility on his end that he could go through with the match. We went to the training facility in Orlando, our temperatures were taken when we walked in, the place was you know, scrubbed up and down, there were a limited amount of people in and out of the building. It was very controlled, I mean it was as — I think what happened was, somebody was sick and Roman heard about it. They didn’t have [COVID-19], they just had the flu. But just the fact that someone was sick in those circumstances, at the end of the day he just couldn’t do it.”

Roman Reigns was planned to win the WWE Universal Title at WrestleMania 36. Strowman won it instead and now the Monster Among Men has Bray Wyatt lined to to face him next.

Hopefully, Roman Reigns will be able to come back to WWE soon. In the meantime, WWE is pushing through and will continue to air their show live every week.

How would you book Roman Reigns’ WWE return? Who will be the WWE Universal Champion when he comes back? Sound out in the comments below!