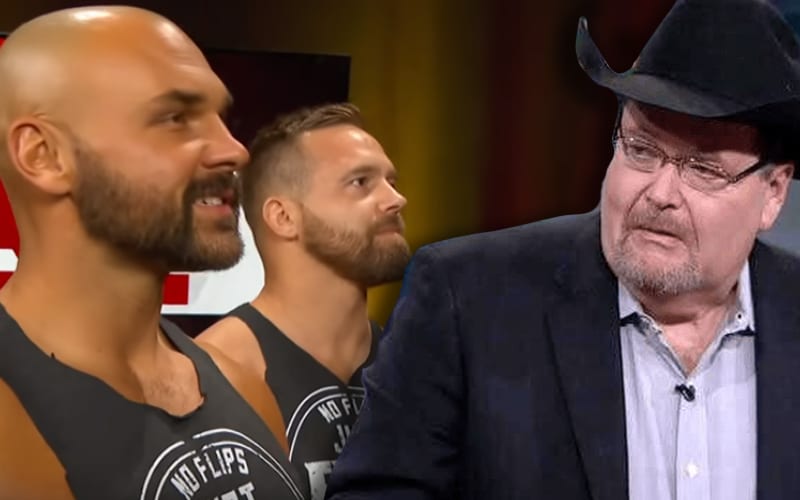 The Revival were released from WWE effective immediately. They were sitting at home and not getting paid anyway. Now they could be on their way to AEW.

Top Rope Nation Wrestling Podcast recently spoke to Jim Ross. He spoke about The Revival’s recent WWE release as the news broke just before the podcast was taped. He had a lot to say, but he doesn’t have much insider information to share.

Jim Ross was in talent relations in the past, but that part of his career is behind him. He seems happy to be out of talent relations and strictly behind the broadcast desk. He still sees a lot in The Revival and what they can bring to All Elite Wrestling if they can work out a deal with Tony Khan.

“Well, it’s a big if, everything’s a big if, because I don’t know what The Revival’s goals are. I think they would fit into our team very, very well. You know, we’re trying to be a little bit more athletic, athletically oriented, more fundamentally sound in our storytelling. And the Revival team certainly fits that bill. They are one of the best tag teams in the world, period, no matter where it is. So I think they would do great in our company, whether that happens or not remains to be seen.”

“There’ll be gross speculation that it’s a done deal, all that good stuff. But Tony Khan handles that, and I’m not in that talent relations role any longer. Thank goodness. I’m the Senior Advisor. Let me tell you what that means, the job description is this: I take credit for all the good ideas and I disavow any knowledge of the ones that suck. So that’s a Tony…I can’t imagine, knowing Tony Khan as I do, and the fan that he is and his ability to spot great things.. I can’t imagine that he wouldn’t be interested. Why would anybody not be interested in Revival is my question? So I’m thinking there’s a possibility they come to work for us. I think, you know, I’d love that. I’d love to call their matches. I’ve watched a lot of their work, you know, they’re a throwback team. That doesn’t mean they wear black boots. And, you know, it’s just the old school stuff. They are fundamentally sound, they’re old school oriented in the process of telling a story. And I think that’s really important. They don’t leave things out. They don’t take shortcuts. And they have the ability with their skill set, to work with any team out there and make that team and that match better. And we’ve got some really good teams evolving in AEW of course led by the Young Bucks, who may be the best tag team in the world. If they’re not, they’re certainly in the conversation.”

“But one could certainly as a broadcaster, and as a fan, because I don’t have any insider information on this deal, I just read about it a little before we went on, we started recording that, you know, that these guys are released there, they may become available sooner than later. I don’t know about how long their no compete is. That’ll be a big point, everybody will have a theory on that deal, usually they’re 90 days but I don’t…WWE may have, you know, rescinded that on where they stood. They may have made exception. Let them go do their thing. So anyway, I hope that they consider AEW. I’d sure as hell like to call some of their matches. They remind me a lot of the old Midnight Express. They just don’t have a Jim Cornette in their corner right now. So, but boy, these guys are good. They’re really good and they’re young. They’re athletic, they’re durable. They seem to be good locker room guys, they’re wrestling guys. They’re not sports entertainment guys. That was never a great fit. But they’re wrestling guys and they need to be in a wrestling company. For my money, that’s AEW.”

The Revival have no non-compete clause. They are free to work for or sign with whichever company they choose. The only problem is that with the current world situation, there isn’t a lot going on right now.

Do you think The Revival will end up in AEW? How about Impact Wrestling? Who should they face first? Sound off in the comments below!