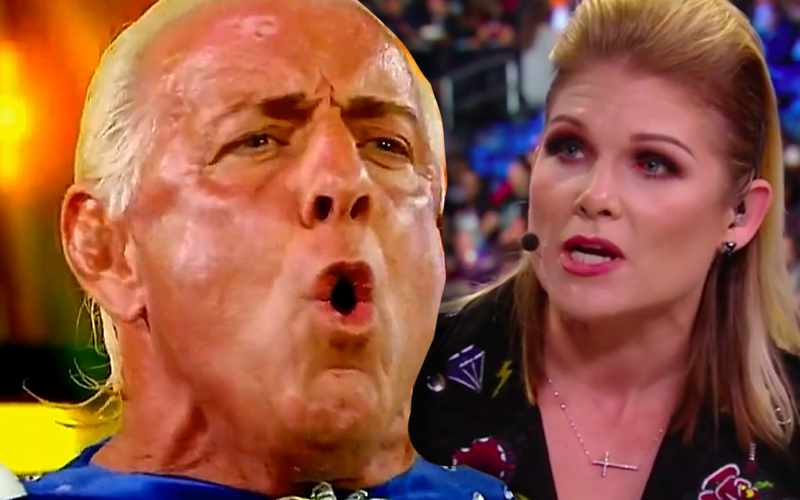 Ric Flair left an impression on plenty of people throughout his legendary career. Beth Phoenix has a few great stories to tell about The Nature Boy as well.

During WWE Dream Match Mania, Beth Phoenix and Charlotte Flair joined Matt Camp to provide commentary over a match. The match happened to be Flair vs Phoenix in a simulated digital world.

During the match, Phoenix told a story about one encounter with Charlotte Flair’s famous father Ric Flair that she’ll never forget. The experience nearly saw her taking a bump in the middle of a restaurant.

“I was very fortunate that I got to work with your dad, like I we crossed paths during the tail end of his career and I actually got to tour with him and got to know him. I actually have a pretty funny story about your dad.”

“It was the very first tour we got to go on together. We were waiting on a flight from Japan that was delayed so we were all in an airport restaurant and I’m sitting there listening to Ricky Steamboat and I’m sitting there like a little fan like ‘Oh my god Ric Flair’s here I’m gonna be on the same show as Ric Flair.’ All of a sudden, Ric Flair stands up and goes: ‘BETH PHOENIX LOCK UP WITH ME!'”

“I without any hesitation just stood up and walked over to him and we just locked up and he got me in a headlock and then the restaurant stopped like 100 people everyone’s looking at us. He was like, ‘Shoot me off and take a tackle!’ I was like, ‘Yes sir!'”

“I shot him off and he ran back at me and I’m telling you in every fiber of my being I’m going ‘I’m taking a bump on the floor of this restaurant for Ric Flair I cannot wait!’ Then he stopped short and said, ‘You were gonna take a bump, weren’t you?’ I was like, ‘I would have, dude,'”

Beth Phoenix said that she shared a friendship with Ric Flair as he was always around to help. She also revealed that near the end of her in-ring career Ric Flair walked up and started bragging about his daughter Charlotte and how she wanted to be a pro wrestler, too.

You can check out the clip below at about the 45 minute mark of Dream Match Mania.