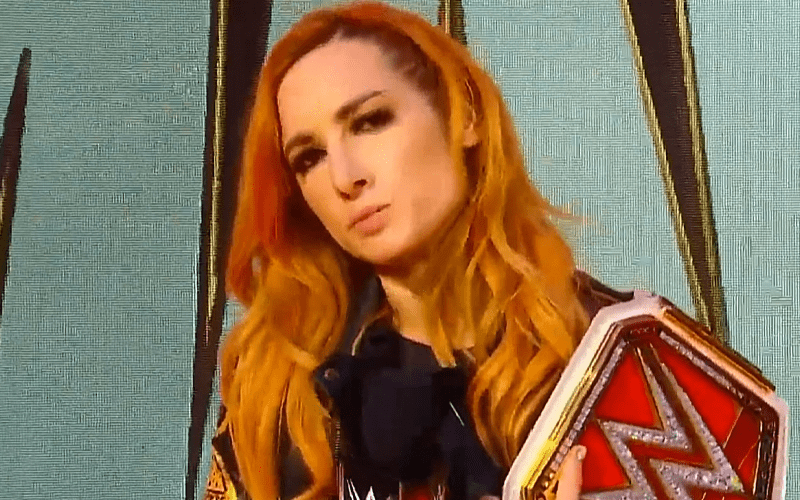 WWE didn’t close their doors during the current novel coronavirus situation. They did have to alter practically everything about their weekly programming to stay on the air.

Becky Lynch remained RAW Women’s Champion throughout this turbulent time in WWE. She had to prepare herself and fans for a RAW Women’s Title match at WrestleMania against Shayna Baszler. The Man also had no live fans to help her tell that story.

While speaking to Not Sam Wrestling, Becky Lynch discussed different issues presented when cutting a promo in front of zero live fans. The WWE Universe can help edit a program’s direction as they feed off reactions. This isn’t something that was afforded to anyone on the road to WrestleMania 36.

Becky Lynch said that she needs to go off her instincts and carry on. Fans might not be with her live, but she knows they are at home and need a distraction from this current awful world situation.

“Yeah, and that’s the hope [that fans are cheering at home] I think that’s where you have to be a little bit more focused in and really think about what your message is and what you want to get across.”

“What is the message you want people to pick up on? You have to really think about that and you have to zeroed in and remember that there’s nobody in the audience there, but there’s millions of people watching at home who need a little break, they need an escape and if you can give them.”

“That message then it does require a whole different set of concentration because we are used to riffing off the crowd — ‘Oh, that worked, that didn’t work alright, alright they’re with me on this maybe they’re not with me on that maybe we could adjust here.’ Now we’re just going on instinct like ‘Okay, what do we feel is right?’

Becky Lynch’s match against Shayna Baszler took place last week. Fans will see how it turned out this weekend at WrestleMania. Lynch has previously stated that her match will be featured during the first night of the show of shows.

WWE plans to tape another set of Performance Center episodes on April 10th. This is one day after Orange County lifts their current stay at home order. The company’s next scheduled live event is a Friday Night SmackDown taping on May 1st.

Hopefully, this situation will pass and The Man will get to perform in front of fans again very soon.