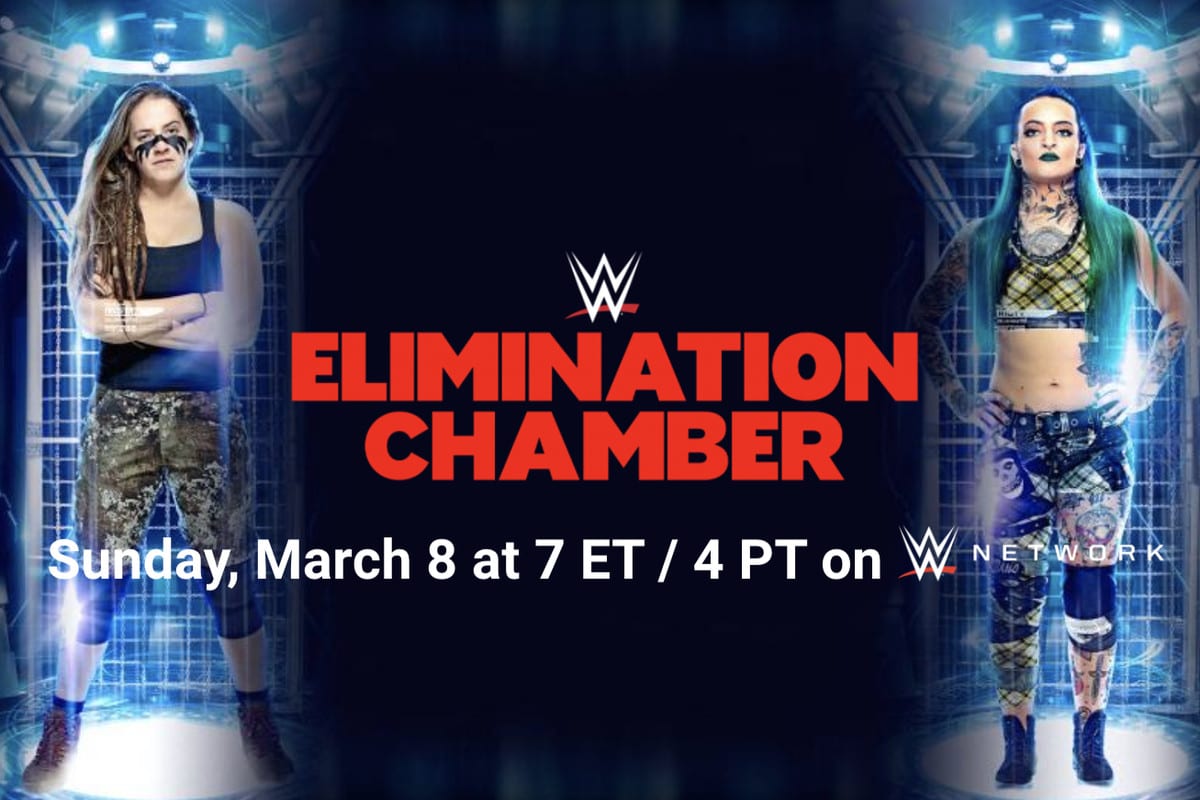 As always, tonight’s PPV will feature two Elimination Chamber matches; a woman’s and a tag team Chamber. The women’s will feature Shayna Baszler, Asuka, Sarah Logan, Ruby Riott, Liv Morgan, and Natalya, all vying for a shot at Becky Lynch at WrestleMania. The obvious problem here is that Baszler is the only possible winner, so it runs the risk of being a predictable affair. Meanwhile, the tag Chamber will feature The Miz & Morrison Vs. The New Day Vs. Heavy Machinery Vs. Lucha House Party Vs. The Uso’s Vs. Ziggler & Roode, with the SmackDown Tag Team Titles on the line.

As for the rest of the card, Andrade will defend the United States Title against Humberto Carrillo, AJ Styles will face Aleister Black with no disqualifications, Daniel Bryan tackles Drew Gulak, The Street Profits defend their new Raw Tag Titles against Rollins and Murphy, and Braun Strowman puts his Intercontinental Title on the line against Cesaro, Sami Zayn, and Shinsuke Nakamura.

And that’s the show. It’s quite a stacked card and it all begins with the Kick-off Show at 6PM EST. So strap-in for a night of wrasslin’, which you can read all about on the Ringside News app. Enjoy the show!

The Elimination Chamber Kick-Off Show is live with The Coach, Peter Rosenberg, Charly Caruso, and David Otunga. The panel joke about Rosenberg being officially signed to WWE, and run down the card for tonight’s show.

Ruby Riott has joined the panel to discuss the women’s Elimination Chamber match after a video package. Charly asks Ruby about Liv and Logan being threats; she says they’re products of her, so of course they are threats. And she came back to put Morgan in her place but now Logan needs it as well. And once they’re done she can focus on winning the Chamber and going to WrestleMania. Peter asks Ruby if she should be more concerned about Shayna Baszler. Riott says for three years she has been overlooked. Last year she watched the pre-show panel and they didn’t even mention her, but now she’s sitting here and she’s going to make sure nobody overlooks her. Otunga asks about her stepping inside a Chamber for the first time, and she says it’s unforgiving but all that matters is that she gets through it and makes it to WrestleMania.

We see some highlights of Aleister Black facing each member of The O.C. on Raw, and the panel talk about how this is a dream match, with Black acing Styles in a No Disqualification match. Black cuts a promo backstage, saying he didn’t back down despite being attacked three times. And tonight there is no disqualifications and no-one to save AJ. He says he’s going to put him to sleep.

Kayla Braxton is backstage with Braun Strowman, and she asks if he is ready for a handicap match. Strowman says he doesn’t care how many of them get out of that clown car tonight. Braun says Nakamura and Cesaro are two of the baddest men in WWE but he’s worked for years to get this title, and anyone who comes near it is going to get his hands. The panel say Braun might be underestimating Sami Zayn and the odds are against him, but that he’s also a rare Superstar and the title means something to him.

R-Truth has joined the panel and he has a John Cena shirt on his shoulder. He thinks tonight is WrestleMania and looks baffled when they tell him it’s Elimination Chamber. Truth mistakes Rosenberg for Sam Roberts. They ask him what he thinks of Drew McIntyre Vs. Brock Lesnar, and he says the people are starting to believe Drew will walk away as Champion.

The Viking Raiders Vs. Hawkins & ryder

The match starts with Ryder and Erik, with the big man forcing the bro to the ropes. Ryder takes a headlock but gets shot-off and dropped with a shoulder. Erik punches Ryder to the corner, and Hawkins tags in.

Hawkins too gets dropped with a shoulder. Hawkins drops down and leapfrogs Erik but then eats another shoulder. Ryder distracts Erik, allowing Hawkins to hit a running knee and a belly-to-back suplex. Ryder tags in and hits a neckbreaker for a two-count. Ryder applies a headlock.

Erik fights to his feet but gets thrown from the ring, where Hawkins hits a suplex. Hawkins gets him back inside and tags Ryder, who unloads some right hands. They make use of quick tags to beat Erik down and keep him isolated.

Erik connects with a right hand and tags Ivar, who comes in hot with a clothesline and a crossbody to Ryder. Ivar hits a seated senton to Ryder, cartwheel and a clothesline to Hawkins. Zack inadvertently hits a Rough Ryder to Hawkins, then gets hit with the Viking Experience and that’s all she wrote.

Zelina Vega and Andrade are interviewed backstage, and she says she wants to set the record straight. Last week, Rey Mysterio illegally entered the ring and kicked Angel Garza into Andrade. Because he’s a real man, Andrade continued on and Humberto took advantage. She says Carrillo will be a success one day, but it won’t come at Andrade’s expense.

And that’s about it for the Kick-Off Show. Elimination Chamber 2020 is starting right now!