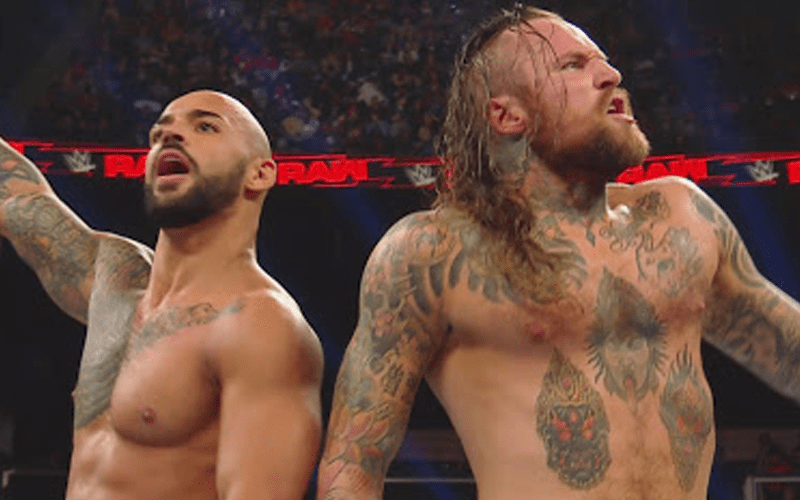 Vince McMahon wanted to shake things up last year so he called up NXT’s four top Superstars at once. That is why Ricochet, Aleister Black, Johnny Gargano and Tommaso Ciampa all arrived on the main roster at the same time.

During that stint, Tommaso Ciampa needed neck surgery and Gargano was moved back to NXT. Ricochet and Black remained on the main roster until the WWE Draft split them up.

One fan sent out a collage of Ricochet and Aleister Black’s time as a tag team. They said of the team: “IMO, the pairing of Aleister Black & Ricochet had the potential to be one of the Greatest Tag Teams of All-Time!”

Aleister Black saw this tweet and he replied to put Ricochet over in a big way. He couldn’t have asked for a better tag team partner. What made them so different eventually helped them gel as a team, even if it didn’t last long.

Could not have asked for a better partner to start with. We tried our best to make it work, we are as different in life as in ring & we embraced that and created something fun. Getting in there with guys like the Revival, Bar, USO’s, Hardy’s etc was an amazing learning curve.

Aleister Black and Ricochet are on the same brand once again. RAW is a much different place for Black than it is the One And Only.

Ricochet is apparently being buried by Vince McMahon. We’re not certain if he has any backstage heat, but he’s being treated like someone McMahon lost interest in.

Aleister Black is being booked strong, but we’ll just have to see how his No DQ match against AJ Styles plays out at the Elimination Chamber pay-per-view this Sunday.