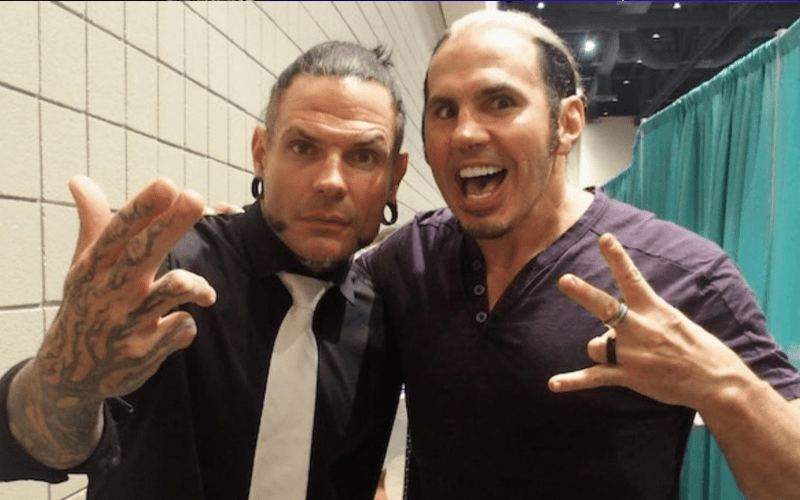 Matt Hardy and Jeff Hardy were split up on television when Jeff was injured. Matt’s WWE contract ran up in the meantime while Jeff was at home working on himself. The Hardy Boyz aren’t together in WWE anymore, but they are still very happy for each other.

Matt Hardy recently called into Busted Open Radio. He wanted to talk about Jeff and how great it was to see him on WWE Backstage. Matt said that Jeff Hardy is doing much better which was evident from Jeff’s appearance on WWE Backstage this week.

“First and foremost, I wanted to hit on Jeff. It was great to see that last night and just how healthy and refreshed he looks and like, the conversations I’ve had with him, he’s been very different and its been very good, and I know he had a lot of stress going on, especially the situation with our dad who was in real bad health and I wasn’t really working on the road at that time and Jeff really was there with him everyday, working, trying to help him rehabilitate and get better and he did but I know it was a lot on Jeff so, I’m glad Jeff finally took some time to himself and took care of Jeff and I’m very excited for him to be back and I hope he does great in everything he does.”

It’s great to see that everyone seems to be doing better. Matt Hardy is expected to arrive in AEW eventually. Jeff Hardy said that he is 100% cleared for a return to WWE and he is just waiting for the right creative to come back.