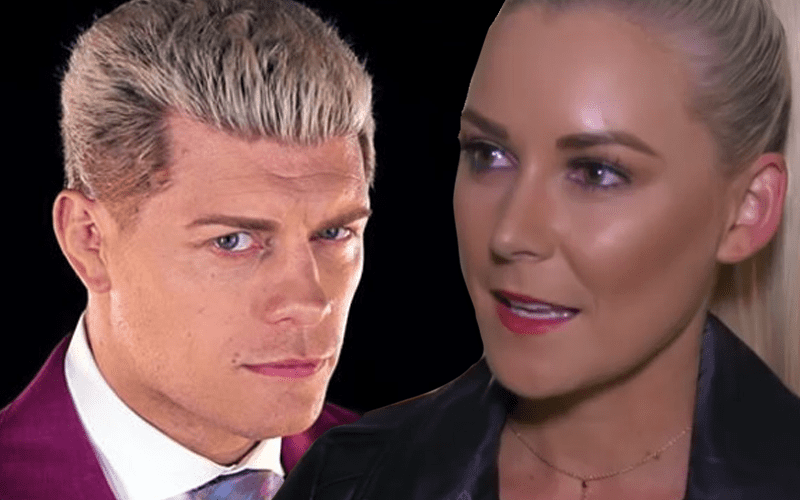 Jon Moxley is AEW World Champion and his wife Renee Young is still under the WWE roof. Their marriage is just fine and they seem very happy. The fact that company lines separate them professionally hasn’t changed their lives much at all.

While speaking to Chasing Glory, Renee Young revealed a very interesting story. When she started dating Jon Moxley, Cody Rhodes was still in WWE. He said it’s great that they’re together, but then he wondered how things might change when things aren’t going so well for one of them.

That comment from Cody really stuck in the back of Young’s mind.

“I remember talking to Cody Rhodes when Jon and I first started dating, and he was like ‘Aw, that’s cool that you guys are together, but it’ll be interesting to see how you’ll react when things aren’t going so well for one of you.’ Things at the time were going great for me and Jon,” Young said. “It always stuck in my head like ‘Oh, what does he mean by that? Like, what does happen if something is not going well, or we have a bit of a struggle?’ Obviously now, we’ve been together for six years and married for three of them. Obviously, we’ve gone through those bumps where things haven’t been so great. But, I couldn’t be happier that he’s the person that’s beside me when I’m losing my mind, and not knowing what’s next.”

Renee Young said that she didn’t face any difficult situations when Jon Moxley signed with WWE. A couple Superstars asked how Mox is doing, but other than that they don’t bring up Renee Young’s husband to her much.

It’s good that Renee Young isn’t going through any unnecessary circumstances just because Moxley decided to leave WWE. We still have to wonder what Cody Rhodes meant by those words that make him seem more like a fortune teller in retrospects.