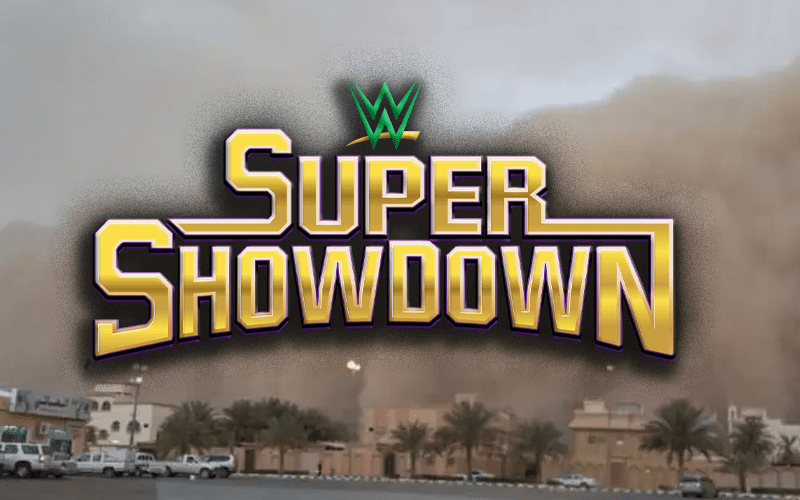 WWE Superstars made it to Saudi Arabia. Now they will have a day to enjoy the country before the big Super ShowDown event tomorrow. We will have full coverage right here at Ringside News.

The Superstars made it, but they landed in the middle of some pretty difficult weather. There is a bad sandstorm going on right now in the area.

Arab News reports that schools in Riyadh are closed on Wednesday. The heavy sand storm is to blame for this as it wasn’t predicted to cease.

Educational institutions in Riyadh will be suspended on Wednesday due to weather forecasts predicting an ongoing dust storm will continue.

The WWE Superstars reported arrived to their destination rather late as well. They were able to make it on the ground as you can see in the video here.

It’s unknown if this sandstorm will cause a problem for the Super ShowDown event. The venue is an open-air facility. Heel By Nature reports that they were nearly 1 1/2 hours late landing and the WWE crew were given face masks to shield themselves from the sand storm.

The chartered flight from Winnipeg arrived at the King Khalid International Airport 1 hour and 25 minutes late.

The entire WWE crew were provided face masks due to the high winds and gusts of sand.

WWE Superstars were told that the company would investigate getting other travel arrangements. They didn’t want a repeat of what happened during their Crown Jewel trip where they were stuck in Saudi Arabia for an additional day last time.

In the end, they went with the exact same airline again this time.