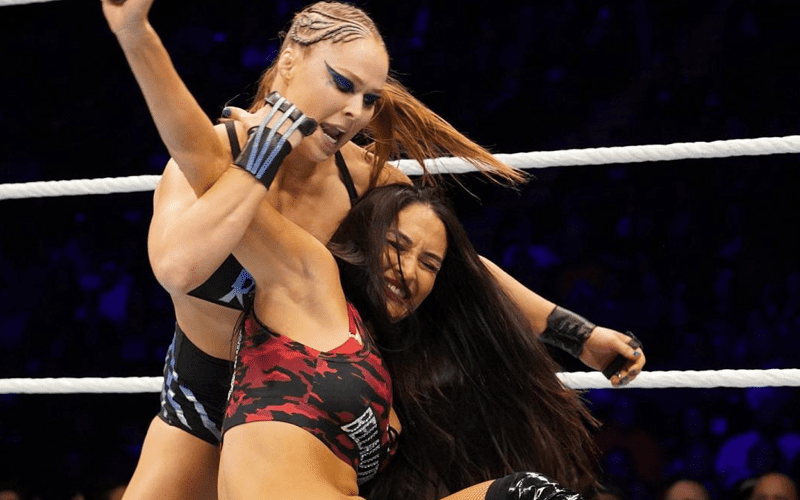 Ronda Rousey has yet to make her WWE return since last year’s WrestleMania event. Nikki Bella was fortunate enough to get a match with The Baddest Woman On The Planet at WWE Evolution.

During the Bella Twins’ appearance on WWE Backstage, Nikki Bella discussed her match with Ronda Rousey. She had to prepare differently due to Rousey’s unique set of skills.

Bella also discussed how she trained with Ronda Rousey for about 20 minutes and that was all the contact they had before the match.

“Having this champion, this UFC fighter, I knew I couldn’t go in there and be like ‘Fearless Nikki’ always was. I had to wrestle different, I had to be more aggressive. Before that match, Ronda and I trained for maybe 20 minutes, that was all we ever touched.”

“I felt her strength and power, and I was like, ‘Oh, this is something way different, I never felt this from a man before.’ So, I went in there thinking, ‘You are Goliath about to fight David—even though David conquered—but you are going to be the monster in that.’ That’s how I had to think.”

Nikki Bella will likely never wrestle again. She had a neck injury and a cyst on her brain. Now that she is pregnant, motherhood and other celebrity ventures will likely take up her time.

A return for Ronda Rousey still isn’t out of the picture. She did exit WWE on an “impregnation vacation,” but we have yet to hear about an incoming bundle of job at Browsey Acres.