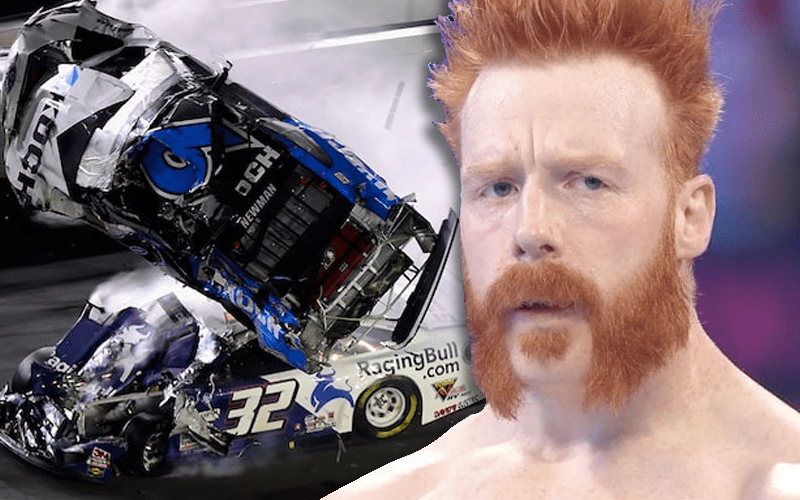 Sheamus was at the Daytona 500 driving the pace car for the race. He had no idea what would happen after he left the track.

Ryan Newman suffered a devastating crash during the race. He is currently recovering, but plenty of people were concerned when the wreck happened.

While he was on WWE The Bump, Sheamus discussed Newman’s wreck. The Celtic Warrior had to leave the race after his portion was done, but once he saw the news it was a real shock. He spent some time with Ryan Newman earlier that day and remembers joking with the NASCAR driver about how jacked he is.

“So when I was waiting to get in the pace car Fox brought me over and said, ‘Listen, we want you to go around and have this skit where we meet all these drivers by their cars.'”

“I was like, ‘Okay, cool’ it was a last minute thing. The first person I interviewed was Ryan Newman and the thing about Ryan is that mate, you’re around all these other drivers and you think that they’re smaller and skinny so the car will go faster — it’s like go-karting, I always came last in go-karting.”

“So the thing about Ryan was that he’s jacked. Like his shoulders are wide like my mantel piece back home. I was like, ‘man this is great like a WWE sized race car driver for NASCAR. I asked him how he got in the car and we had a laugh and I challenged him to a bench press competition which I’m pretty sure I wouldn’t beat him in either. I mean he’s a NASCAR driver, but he looks like the security for NASCAR, you know like if he could fit in the car then there’s hope for all us big guys.”

“He was really, really cool he had his daughters there. Then when I got home I was in the gym and I saw that the crash happened and it was unbelievable. It was insane. I was just like keeping an eye on things. I wasn’t sure how bad it was because they’re strapped in the car pretty good, but then I saw he was taken away in an ambulance. All day Monday my thoughts were with him and his family. I’m hoping that he pulls through it looks like he’s doing a lot better now. He’s talking and he’s conscious. Hopefully, we’ll see him back in a car very soon.”

NASCAR has a ton of safety measures in place that likely saved Ryan Newman’s life. It’s awful when someone goes through that kind of tragedy. Sheamus was certainly shocked to discover that a man he shared a laugh with and challenged to a bench press competition would end his day in such unfortunate circumstances.

Big Update: Ryan Newman was able to thankfully walk out of the hospital on Wednesday afternoon.