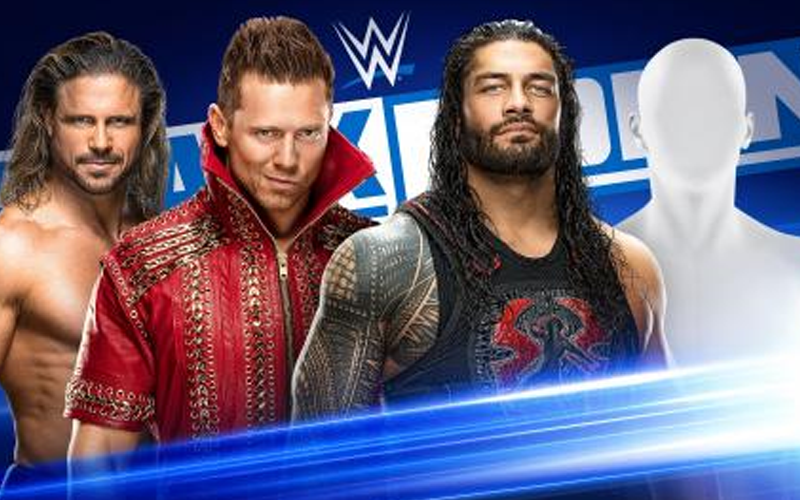 These two were in the ring. Sami had a ukulele and Sami welcomed everyone to their protest concert. They are unhappy about how Braun Strowman treated them.

Then he played a protest song. Cesaro had a cowbell because we need more cowbell.

Before they could get going, Elias came out and he got a good pop by strumming his guitar. He said that Sami is trying to make a name through Elias.

He said that WWE stands for Walk With Elias. It was a huge reaction. Sami told him to shut his mouth. Elias said he’s staging a counter protest right now.

Sami and Cesaro had some security and they let Elias in the ring. He said a lot of this song has to do with Elias and Elias said he’s interested. Then they started playing a terrible song as Cesaro gave it way too much cowbell.

The crowd chanted “Walk With Elias” to the tune of 7 Nation Army. Elias said he likes that song more. Sami told Cesaro he needed less cowbell and he got boos. The crowd chanted: “we want cowbell” and it was loud.

Then Cesaro shushed everyone before throwing the cowbell down to get heat… BRILLIANT.

The crowd continued to chant for Elias and they drowned out Sami’s playing. He never sang anything. He said if the crowd doesn’t shut up then the concert is over. They wanted them to leave and so did Elias.

Sami said the only joke around here are the local sports stars’ numbers hanging from the rafters. Then Elias attacked Cesaro and Sami avoided contact by using a mic stand.

Braun Strowman came out next and barreled over the security. Then Strowman chased Sami up the ramp. A security guard distracted Braun and he ended up in the ring with Elias and Braun where they threw him onto the other security guards.

They showed Naomi backstage and she wasn’t happy about Bayley and her mess. She said what happened to Mella tonight wasn’t fair. She wants a title shot because Bayley has never defeated her. She knows the Glow is real and she’s the next champion. Then she left.

Otis showed up in a cut-off tux and some flowers. He was super awkward as Mandy sat at the table. Then Dolph Ziggler showed up instead.

Otis walked around the corner and saw Dolph with Mandy. He dropped his flowers and was very sad. Then he left.

The Miz and Morrison took a shot at the fact that the Usos can’t go to Canada. It doesn’t matter if Jimmy was found not guilty for a DUI apparently.

King Corbin showed up with a ticket in hand. He might have been fined and banned, but he showed up to watch the main event.

These four had a decent match and the crowd was very much behind them. Daniel Bryan took control over Morrison and kicked him around the ring. They climbed up top and he sent Morrison flying with a hurricanrana.

Then Morrison took control. Roman walked over to check on Bryan who was right in front of Corbin. Miz jumped on Roman on the distraction and then Morrison hit a nice corkscrew dive on everyone.

When we came back from commercial, Corbin was applauding the heels as they continued to maintain control over Daniel Bryan.

The Miz took the tag after Morrison landed a running knee. Bryan launched Morrison over the top and Miz sent Bryan to the apron. Bryan climbed up top and then Miz crotched him before climbing up too.

Bryan blocked the superplex. He slid down and started to crawl toward Roman, but Morrison got the tag and knocked Roman off the apron. Morrison picked Bryan up and slammed him down before hitting a shining wizard for a two count.

Morrison climbed to the top and he missed a big flipping splash. Daniel Bryan crawled toward the corner and he tagged in Roman who took out The Miz with multiple clothesline and a punch.

Roman hit clothesline in the corner on Miz followed by a big boot. Roman geared up for the Superman Punch, but he missed. Morrison took the tag and kicked Roman for a two count. King Corbin wasn’t pleased.

Morrison hit a shining wizard on Reigns for another two count. Morrison went to climb up, but Roman grabbed him and rolled him up for a two count. Then he caught Morrison in mid-air with a Superman Punch.

Roman went for a spear, but Morrison hit a boot. Miz got the tag and hit a Skull Crushing Finale, but Bryan broke up the pin. Bryan hit a suicide dive on Morrison, but Miz intercepted his second dive attempt with a knee to Bryan’s face.

The Miz mocked Bryan with yes fingers, but Roman landed a Superman Punch on Miz and then he hit a spear for the win.

After the match, King Corbin hit Reigns in the back of the neck with his scepter.