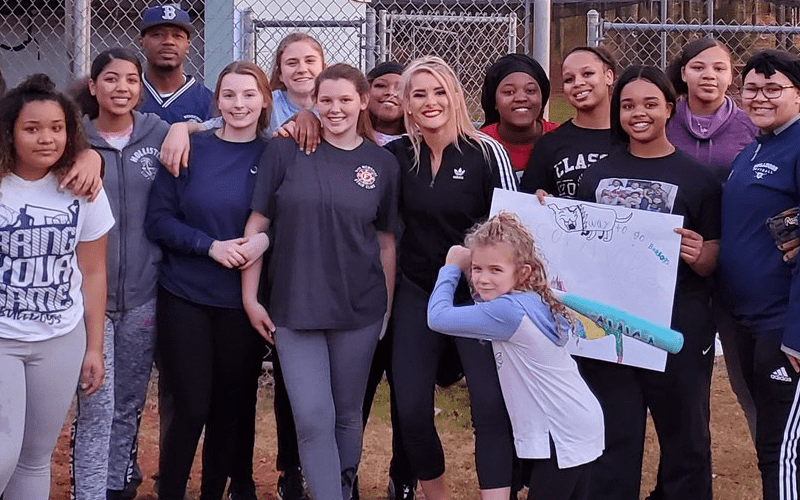 Lacey Evans is paying it forward in a big way by helping a team get ready for play.

The Lady Of WWE received a tweet from a teacher from Newberry High School named Mrs. Newberry. She wanted to know if Evans could simply give her a retweet as they were trying to raise money for JV softball helmets.

Evans replied back saying that she’ll pay for the helmets as long as they keep her updated about how the season is going.

Ill pay the rest….if they keep me posted on the training and outcome of the next game. PM me

While speaking to KFLD, Lacey Evans explained why she decided to help out this softball team.

“It was a teacher that reached out to not only me but I believe a few people on social media. But I take it very serious as far as sports and the impact it has on children. Growing up, I had a very rough upbringing with addiction and depression with my parents and sports literally saved me. So, when I think about anything I can do, use my money, my platform, my blessings, to give back to them babies because I know how much it impacted me.”

“When this teacher reached out and said, ‘You know, any way you can help, if you can retweet this.’ I clicked on it and it was roughly $278 and another fee for other facemasks. Just that number alone, not to mention the rest of it, I said, ‘I can do that for these kids.’ When I did a little more research on this school and teacher, she’s a teacher, she doesn’t have to go above and beyond. For her to do that, I respect her because I don’t even know if she’s aware how much she’s helping these babies. I was there. I couldn’t afford my wrestling shoes when I was in high school and my coaches were incredible. Next thing you know, I’m a state champion, then ninth in the nation, now I’m with WWE. Had it not been for that, when my father was addicted and high and slumped over, and I still made it to practice and these coaches were there for me. It’s teachers and coaches like that I respect, and if there’s anything I can do to help, I will.”

This is a pretty cool story and shows that Lacey Evans hasn’t forgotten about her roots as she’s said many times. Hopefully, she gets constant updates throughout the season and there are a lot of wins to talk about.