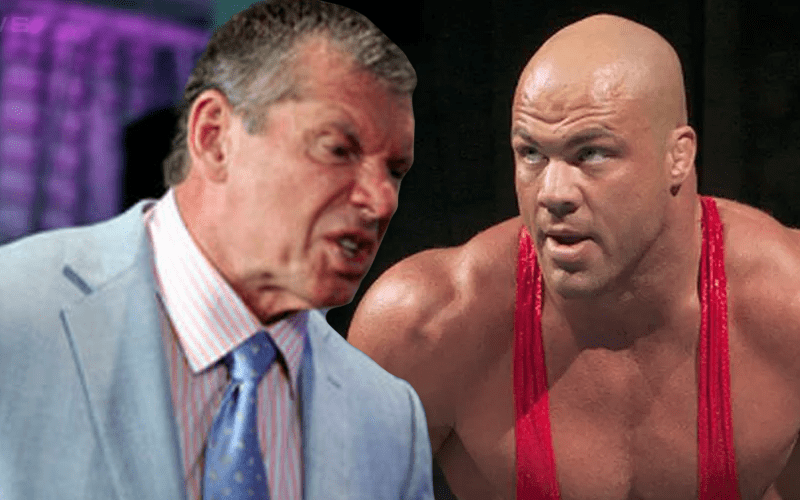 Kurt Angle didn’t leave WWE in the most congenial way. In fact, it was quite explosive in a manner of speaking.

While talking to Chris Van Vliet, Kurt Angle walked him through his release from WWE over a decade ago. Angle wasn’t in the best mindset at the time. He was taking a ton of painkillers and somas as well. This caused him to grab his phone to send some texts that he certainly didn’t remember when he sobered up. Some of those texts were direct threats toward Vince McMahon.

“I told him when we had the meeting, ‘We need to talk because I’m not doing well.’ So he pulls out about five typed pages of text messages and phone call messages that I left him. I’m reading them it says ‘Vince I’m gonna beat the sh*t out of you when I see you’, ‘Vince you better answer my call or I’m gonna kick your ass.’ Really crazy stuff.”

“At the time I was taking painkillers and somas and I would black out and here I am texting Vince and he showed me all these and I’m like, ‘Oh my god I actually said this stuff.’ He stood up and he took his jacket off and he says, ‘you wanna kick my ass? Let’s go right now.’ I looked at him and went, ‘Oh my god I can’t believe Vince McMahon wants to beat my ass.’ This guy’s been my father figure for seven years and I had too much respect for him to stand up, but he wanted to go. I left the room and I came back and I broke down and said ‘Vince I can’t do this anymore, I need you to release me’ and he did.”

“Sometimes I wish that he didn’t [release me], but it had to be done to save my life and I know I wasn’t representing WWE the way Vince needed me to. He has a publicly traded company. He has a liability on his hands with the broken neck, the painkillers, whatever else. It was time for me to leave, at least momentarily.”

The decision was made for Kurt Angle to simply leave WWE instead of Vince McMahon actually fighting him. There was no doubt in Angle’s mind that McMahon was serious. He might not have realized the extent of Angle’s ability to control his impulses when he was in such a medicated stated.

This is one of the reasons why Angle also admitted that he felt Vince McMahon viewed him as a liability during his return to the company in 2016.