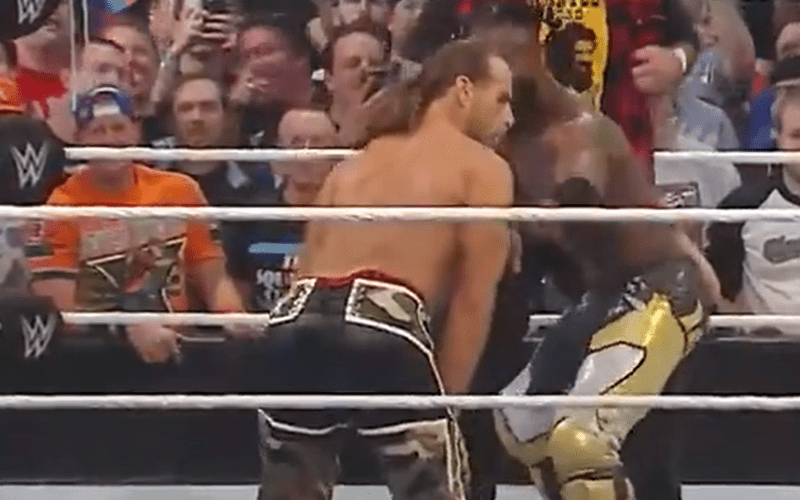 The New Day have been fortunate enough to take part in plenty of great moments in the WWE ring. In over five years they have also racked up quite a few WrestleMania moments as well.

During The New Day: Feel The Power, Kofi Kingston talked about his WrestleMania dream match. He always picked Shawn Michaels as his dream opponent. They never got to lock up in the ring, but when WrestleMania came to Dallas, Kofi got to twerk with HBK. For Kofi Kingston, that certainly counts.

“We have this match with the League Of Nations and when that ends Mick Foley, Shawn Michaels, and ‘Stone Cold’ Steve Austin come out and we get to dancing,” Xavier Woods said. Then Kingston shared his take on their WrestleMania moment.

“Everyone always asks me: ‘What would your ideal match be if you were to ever have a fantasy match?’ It always used to be I’d wrestle Shawn Michaels at WrestleMania. And you know, we didn’t get to wrestle. But, I was in the middle of the ring in front of thousands and thousands of people twerking with Shawn Michaels. To me, that counts. I mean it’s… I can’t believe I’m sitting her saying it.”

Woods said that many men can say they had a match against Shawn Michaels at WrestleMania, but only Kofi Kingston can say that he twerked with the Showstopper. That should certainly count as a dream situation to share the squared circle with HBK in such a special setting. Kofi agreed.