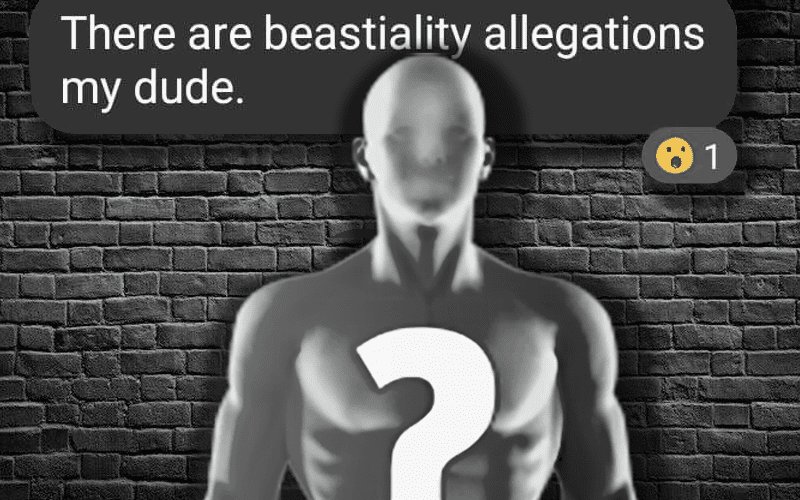 Rory Gulak was fired by CHIKARA and The Wrestle Factory after allegations of misconduct came out. They took these allegations very seriously. The accusations were not divulged, but the release announcement stressed that they take the safety of their fans, talent, and staff very seriously.

A fan named Jenn Mint has come forward with her own personal account of Rory Gulak. In her candid account of interactions with Gulak she detailed some weird experiences. She did not accuse him of sexual assault, but she did say: “He is a predator. Period.”

Things got very dark as she continued to explain that Gulak also made comments about bestiality and having sex in front of children.

Since I’ve constantly been asked and repeatedly accused to making things up because I won’t share details, here’s the story of my experience with Rory Gulak

Also, our sexual encounters on snap were always very weird. I left them feelings very uncomfortable but could never quite figure out why. Then the beastiality comments started so I quietly stopped snapping him. I remained friendly with him on Twitter for some reason.

He would continually make comments about f*cking me while pregnant and about wanting to mount me like a dog. It was very uncomfortable. I quietly stopped snapping because nothing he did was illegal and the snapping was consensual. It just got very weird

When I made that tweet yesterday, I started getting DMs from women with the same experiences. And without me telling my story their stories were all identical. Only some were worse.

One friend who I will not name out of respect for her privacy told me that he would talk about impregnating her then having sex with her in front of the child when it was older. He also brought up beastiality with all of them as well

[She then provided a screenshot from an alleged conversation with Gulak]

Since this story got out, I’ve spoken to numerous wrestlers who have taken issue with him over his predatory behavior and have heard stories of companies refusing to book him due to said behavior.

He is a predator. Period

I feel guilt about not taking any of this public earlier. But he wasn’t breaking any laws and out convos were consensual. But now that I’m hearing from all these women with the same story I wish I had forward so that maybe they wouldn’t have gone through the same experience

Kudos to Chikara for removing him from their roster and contacting the police. But shame on the promoters and his peers who KNEW he was predatory to women and did nothing. And thank you to the ones who refused to book him, removed him from locker rooms, etc.

Also, a huge thank you to the people in the wrestling business who reached out to me today concerning all of this. Wrestling is full of a lot of trash people, but there are some amazing humans as well.

[She then included several more screenshots of alleged conversations]

So many typos. Sorry. I’m exhausted.

More people seem to be coming forward with other stories about Rory Gulak. Jenn Mint stressed that her conversations with him were consensual, but she removed herself when things got out of hand.

This is not a good situation which makes the comment about CHIKARA and The Wrestle Factory working with the authorities even more alarming. Ringside News will continue to monitor this on-going story.

For reference: “Quack” is Mike Quackenbush, owner of CHIKARA.