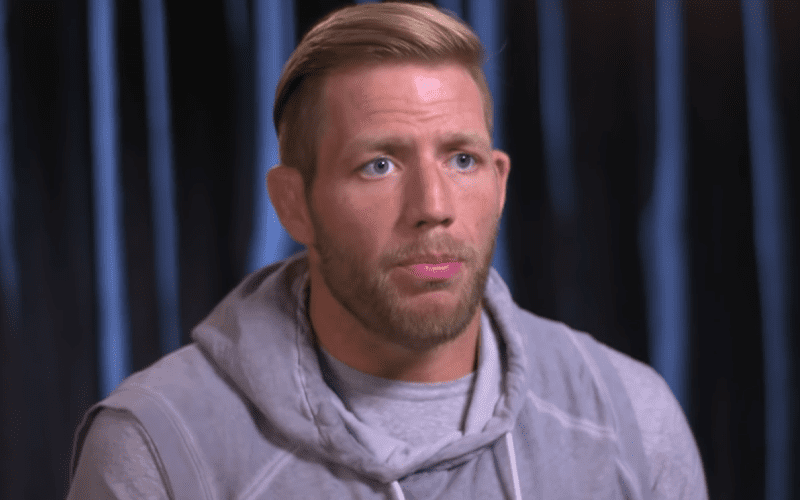 Jake Hager is now an undefeated Bellator fighter with AEW and that is how they are promoting him. The company even inserted a knee to the groin in his last angle to mimic his Bellator fight.

While speaking to Busted Open Radio, Hager explained how it felt to be Jack Swagger in WWE. While he is thankful for his time in WWE, he wasn’t happy with the company. He planned to go into MMA after leaving WWE and credited a “perfect storm” that brought him to AEW.

He then went on to discuss WWE’s logic for putting on stories. If it doesn’t make sense, then they’ll do it. Hager also spoke quite openly about the frustrations he had with the company that caused his eventual exit.

“You know, I am very thankful for the run that I had there [in WWE] but towards the end there when Bully [Ray] was there I was very unhappy. I didn’t know how to make the changes. How to use my hard work to make the changes that I needed to do to get to where I wanted. After so long in that, you beat a dog so many times that dog is going to think that he isn’t worth anything so I feel so refreshed being out of there and in the situation we are now.”

“Honestly, this was the plan now for three years since we left WWE to go into pro fighting and make a name for ourselves and crossover. We kind of felt that the explosion of pro wrestling was going to happen and it was a perfect storm to sign with AEW. It really is something special. When you are on the road for 250 days a year you’re not with your family; you’re not with a lot of people a lot of the times so I felt really lonely at times, and now that I have been out, I take my kids to school every single day. Really, my family is my strength and I realize that and I am leaning on it.”

“If it makes sense up there [in WWE], they are not going to do it. It has to not make sense for them to want to go forward with it. That part gets frustrating because you see so many times that I had really cool moments in my career and then the next day it gets stopped for no reason and who knows why. Maybe I did something or maybe it’s the powers that be that chose it but it is really frustrating because you put your body on the line; you put your back on the line and your neck on the line and give your body to these people and you go out there and give your heart to these people and all of a sudden it is taken away. You don’t even have an explanation for it and then you are back at the bottom of the pile again. I don’t think you can sustain, that is not a good business model.”

“They say that talent is the biggest asset of the company but they don’t treat it as that, so it is so frustrating that you get storylines canceled day of, hours before the show is about to go on. That is one thing we know about AEW. We know the script a week out, even before we go out to TV so we are already thinking about what to do and how to entertain our great fans.”

We’ll have to see what is next for Jake Hager in AEW. He hasn’t even wrestled an actual match yet. It seems like he is much happier now than he was with WWE. At least he has the experience which is something he never discredited.