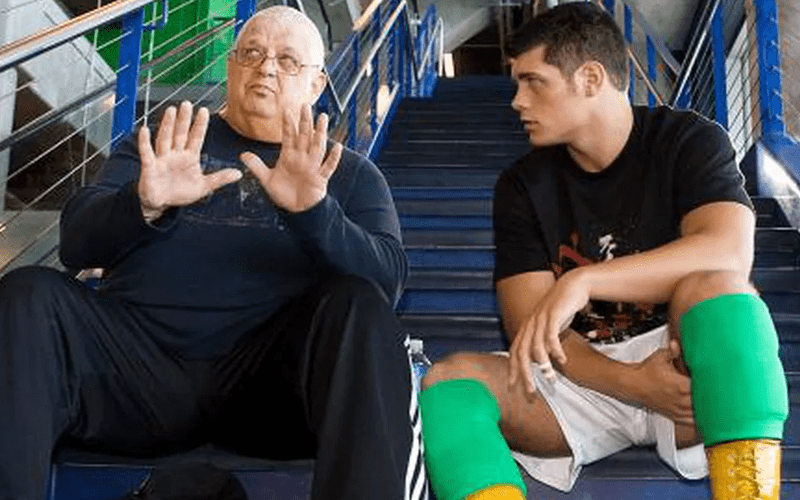 The American Nightmare recently spoke to Adventures In Poor Taste. He expressed his gratitude to WWE for giving his father something to do. Cody also revealed that his mother hit the kitchen floor crying when she saw that a royalty check from WWE for The American Dream’s DVD helped them achieve financial security once again.

It’s very simple. I could smash a thousand thrones and I could make a thousand pot shots and little fourth wall breaking comments about my experience because it is vastly different from Dusty’s.

But as his son, I know that in 2005 when he got his first royalty check for the Dusty Rhodes DVD, which they did a marvelous job on, my mother literally hit her knees in the kitchen and thank god for them having brought him back to financial security.

For them having given him a home in the winter of his life in a functional thing to chew on with NXT and to maybe help and guide a few young stars. So with that in mind and what they did for him at the end, I will never be ungrateful to them.

Now I have my own opinions about my own career that are mine, and people think that because of what they did for my dad I should ya know be voiceless on occasion and that’s just never going to be the case. But, I will always say that I owe them a great debt.

Maybe I paid it personally with the way things ended. Who knows. But I’ll never forget that. Both Hunter and Vince and Stephanie McMahon were very good to my father when he needed it, and as his son that’s something that if they ever ask me to ya know, to repay that debt, I’ll go repay it. Because it was important.

All Elite Wrestling might be providing an alternative for WWE fans, but Cody Rhodes still remembers certain aspects of the company fondly. His experience under Vince McMahon’s watch might have been a bit different, but he’ll never forget what the company was able to do for his father.