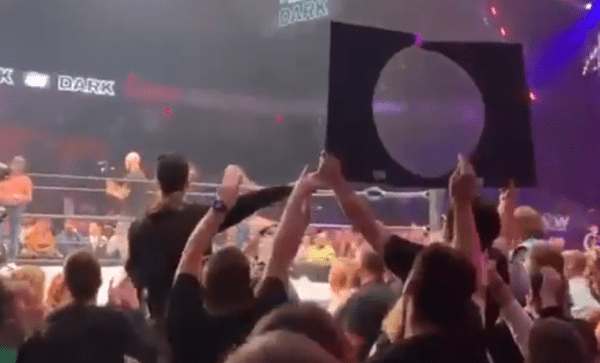 After AEW Dark went off the air, Kenny Omega and The Young Bucks came out to throw some t-shirts. Then Nick Jackson noticed an opportunity.

One fan had a sign that said “Inner Circle” with a hole in it. Nick said if he can throw a t-shirt through that hole then they are bringing a pay-per-view to Charleston.

He tried several times, but then the fan moved the sign right up to the ring and Nick finally threw a t-shirt through the hole.

We are told that after Nick made it through the Inner Circle sign, he grabbed the microphone and said “Twenty years ago they had a pay-per-view here and it sucked. It was called Souled Out.” He asked if the fans would come back if they held a pay-per-view and the response was overwhelmingly positive.

Obviously, AEW is looking to rectify that.