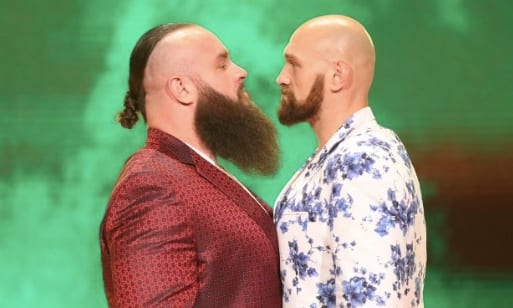 As seen on Sky Bet, the betting odds for Tyson Fury vs Braun Strowman at WWE Crown Jewel have been released.

Crown Jewel, as an event, has been receiving a lot of criticism as of late – and understandably so. WWE’s ties to Saudi Arabia continue to be more than a little bit worrying, and turning a blind eye to that isn’t the way to try and deal with it.

Alas, WWE are trying their best to make everyone forget about the horrors of their human rights abuses by throwing a series of potentially WrestleMania-worthy matches at fans in the hope that something will stick. Braun Strowman vs lineal heavyweight boxing champion Tyson Fury is one of those matches.

In terms of the odds themselves, Fury is the clear 1/6 favourite with Strowman being a distant 7/2 underdog – which, really, shouldn’t come as much of a surprise.

More often than not when an athlete of Tyson’s stature comes into the WWE world, they’re almost always going to get the big win whenever they do wind up wrestling. In this instance, with Fury being hotter than he’s ever been in the public eye, there’s almost no chance of him losing this match.

We’re hoping it’ll be a pretty fun encounter, with many fans already believing it’ll look quite similar to Floyd Mayweather’s match against Big Show back at WrestleMania 24. Of course, the size differential isn’t quite as extreme, but the boxing aspect of it all should throw up a few surprises here and there.