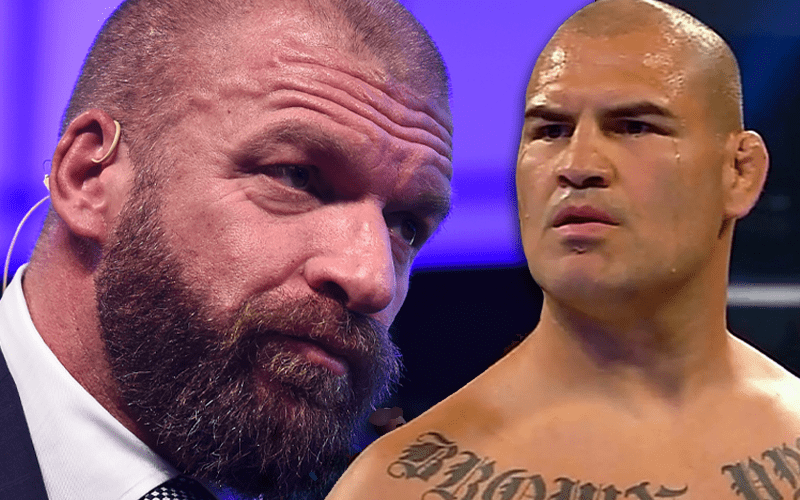 Cain Velasquez signed a multi-year WWE contract, so Saudi Arabia won’t be his last match. In fact, he could become WWE Champion if he defeats Brock Lesnar.

Triple H has a lot to do with the training that Superstars receive at the Performance Center. Their coaches are there to give a Superstar many views and techniques to craft the best well-rounded WWE Superstar possible. Velasquez has some previous training and has wrestled for AAA, but WWE might want to craft him differently.

While speaking to Not Sam Wrestling, Triple H talked about bringing in guys like Cain Velasquez and Tyson Fury who are crossing over into WWE’s world.

“I think it’s awesome; I think it’s great for WWE. I also think it’s great for boxing and MMA. People forget that this is a global company, you talk about household names: Brock Lesnar, WWE Superstars are in many ways the biggest superstars athletically in sports out there because WWE kind of transcends language and nationalities. It’s kind of the one true sport that is everywhere so the aspect of this that crosses all those boundaries with Cain Velasquez, even in places where MMA is not necessarily as big or boxing is sort of everywhere, it’s that crossover that makes the appeal for everybody. It benefits us and benefits them. To me, it’s awesome to bring in this level of talent. Tyson Fury is one of the greatest boxers ever; Cain Velasquez, his career in MMA kind of represents itself well. There’s nothing you can say.”

“It’s a funny thing, as I spoke with Cain Velasquez about a year, year and a half ago he came down to the Performance Center and saw what we did and got in the ring. And obviously from an athlete’s standpoint he was there but it was a question of him as an entertainer, what can he do? But, he has sort of reinvented himself over the last year and has shown that he can do more than just be the fighter.”

“Tyson Fury I think was born to be a sports entertainer who just ended up in boxing in a way because of his background. But if you look across boxing right now it is hard to find someone as entertaining, not only in promotions for fights, but actually in the fights. He is a consummate showman at all times. He is made for this and I can tell you just from the few times that I have seen him step into the ring already just doing what we do, it’s like a fish in the water. He is going to be awesome.”

We’ll have to see how Tyson Fury and Cain Velasquez are able to perform in the WWE ring. Velasquez is an even more interesting situation because they signed him to such a long and lucrative contract.

WWE Crown Jewel might be an event worth watching on October 31st, but if you plan on skipping it, we will still have complete results right here at Ringside News.