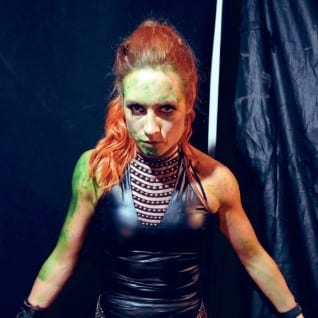 While Becky Lynch may have had a good night at the office on Sunday at Hell in a Cell, she certainly didn’t last night on Monday Night RAW as she was pinned by Kairi Sane during an all-champion tag team match.

The end of the bout came when Asuka, who seems to be a newly turned heel alongside Sane, sprayed green mist into the eyes of Lynch. With her vision being blurred, Sane was able to take advantage and secure the win for the Women’s Tag Team Champions.

As opposed to whining about the result, though, the Irish Lasskicker took it upon herself to wear the mist like a badge of honour.

Throughout the course of their time in WWE, Asuka always seems to have gotten the better of Lynch – most notably back at WWE TLC when she won the SmackDown Women’s Championship from The Man.

Given the fact that Asuka is currently embroiled in a tag team storyline, it doesn’t seem as if the two are going to square off for the RAW Women’s Championship anytime soon. When they do, though, there’s a great deal of potential from both an in-ring perspective and a storytelling one.

A lot of fans were surprised to see Becky come out on top in her feud with Sasha Banks, but perhaps this is just the start of something a lot bigger for her as she continues to reign supreme in the women’s division.

Will Asuka be the one to dethrone her once and for all? Only time will tell.